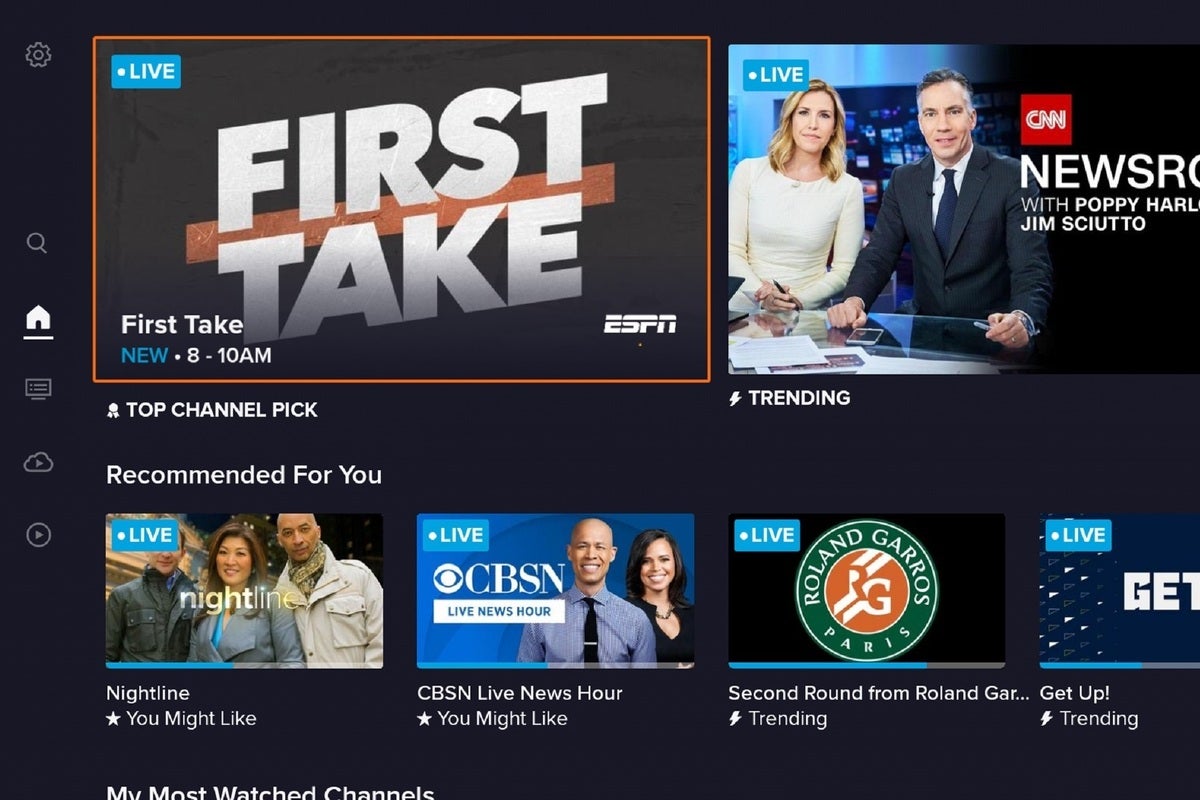 When Sling TV started teasing a new version of its app last week, it looked like a major step up for the live streaming service.

Sling’s interface has always felt a bit crusty, especially compared to slicker live TV services like YouTube TV and FuboTV. The update, which is rolling out now on Amazon Fire TV devices and and heading to other platforms throughout the year, gives Sling a more modern look, simpler menus, and a some new navigation features.

Now that I’ve had a chance to try the new Sling app myself, I can confirm that it’s a big improvement. There’s just one problem: The pre-release version I’ve been testing can be excruciatingly slow, especially while using the channel guide. Hopefully that’ll change before Sling rolls it out to its regular subscribers.

A fresh coat of paint

While Sling has upgraded its interface a few times before—most recently with a slicker look on Apple TV devices—the latest changes are more fundamental.

Sling has replaced its top menu tabs with a left sidebar, and it uses varying thumbnail sizes to break up the monotony as you’re scrolling along. Text is bigger and brighter, the new deep-blue background looks less drab than the old gray, and the app uses more rounded edges throughout. I also like the use of icons to distinguish between live and recorded programs, along the way Sling explains its recommendations with phrases like “Trending” and “You Might Like.” Overall, everything’s a lot easier to read and understand.

Sling has also made some big improvements to each of its menu sections:

I can still find a few nits to pick. While the search page looks sharper than before, it no longer lets you filter results to show just movies or TV shows. Similarly, the DVR menu no longer filters for alphabetical order or unwatched programs. On balance, though, the new menu system looks more inviting and feels more intuitive than the old one.

So what about those speed issues? With a pre-release version of the app through a 2020 Fire TV Stick on loan from Sling, the grid guide feels straight-up unusable at times. It always takes a few seconds to load, and each button press takes a second or more to register. If you’re trying to scroll quickly through the channel list, you might need to wait a while for the guide to catch up, and holding the directional pad in any direction causes all the listings to disappear until you let go.

A Sling spokesperson said the company is addressing issues “so when users browse, the experience will be quick and easy.” I hope that’s true, because Sling has already been informing Fire TV users to expect the update soon, and it’s planning to fully roll it out on Fire TV devices by June 21. That’s less than a few weeks from now.

Sling could use a boost

The big redesign comes at a tumultuous time for Sling TV. The live TV streaming service, which is owned by Dish Network, lost 100,000 subscribers last quarter, leaving it with 2.37 million customers. Compared to this time last year, it’s only up by 59,000 subscribers, and its growth has been far outpaced by Hulu + Live TV (3.8 million) and YouTube TV (more than 3 million subscribers as of February).

Sling is a lot different from those services, though. Instead of offering a full suite of local channels, Sling expects customers to get them with an antenna (or, perhaps, via Locast), and it splits its cable channels across two base packages that start at $35 per month. Even with recent price hikes, it’s still a lot cheaper than most of its competitors.

I’d like to think that the new interface can help turn things around. Otherwise Sling will need to confront a more uncomfortable reality: Its skinnier channel lineup, while noble in spirit, just doesn’t attract the masses like bigger, more bloated bundles do.

Sign up for Jared’s Cord Cutter Weekly newsletter to get this column and other cord-cutting news, insights, and deals delivered to your inbox.

Denial of responsibility! TechNewsBoy.com is an automatic aggregator around the global media. All the content are available free on Internet. We have just arranged it in one platform for educational purpose only. In each content, the hyperlink to the primary source is specified. All trademarks belong to their rightful owners, all materials to their authors. If you are the owner of the content and do not want us to publish your materials on our website, please contact us by email – [email protected]. The content will be deleted within 24 hours.
appBiggadget updateproblemSlingtech boytech newstech news boy
Share FacebookTwitterGoogle+ReddItWhatsAppPinterestEmail

Smartwatch with calling: Best smartwatches with calling feature you can buy in India | 91mobiles.com

Can it get any worse for Amazon in India? | ZDNet

Amazon Fresh is more than quadrupling how much you’ll need…