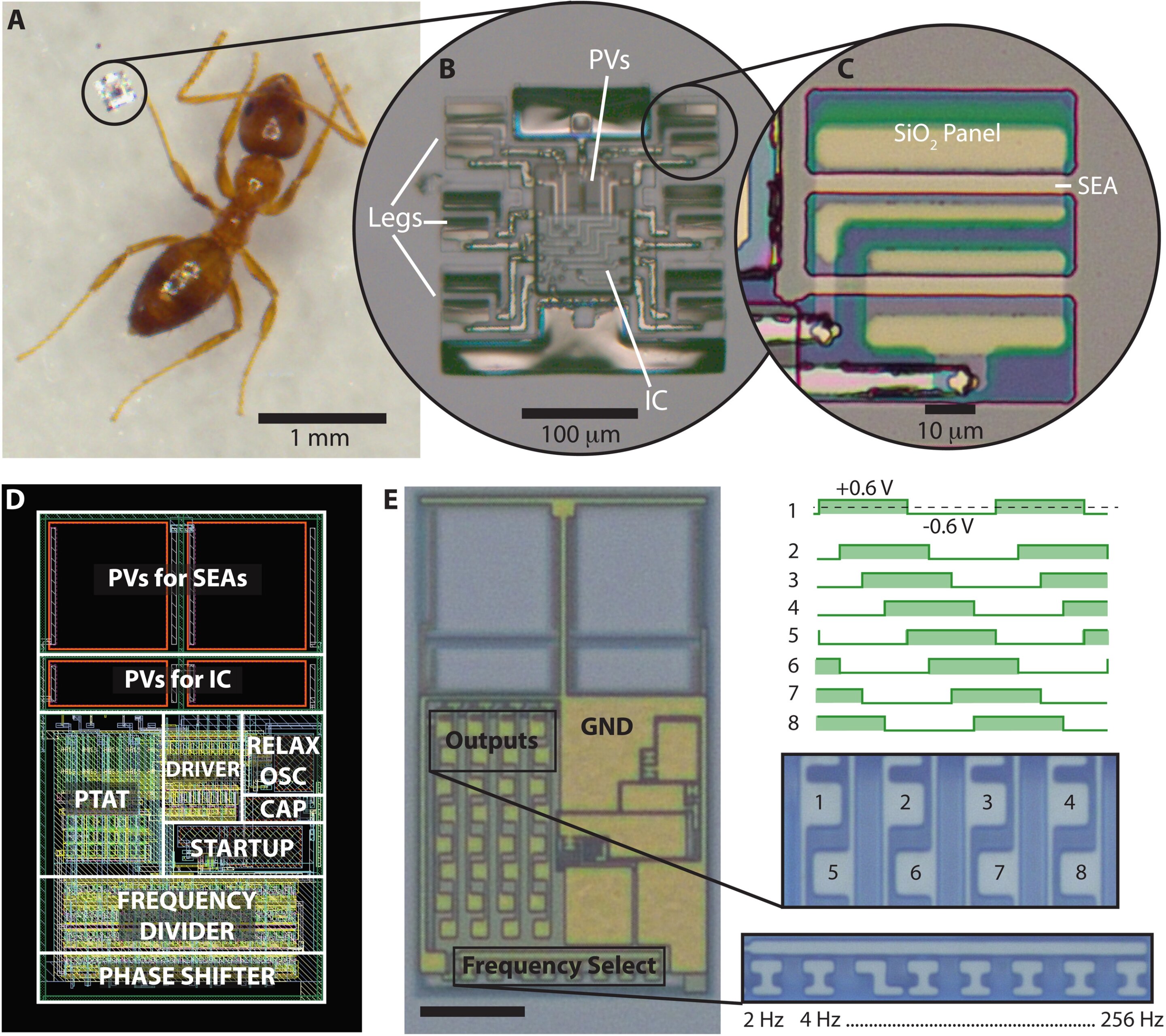 Cornell University researchers have installed electronic “brains” on solar-powered robots that are 100 to 250 micrometers in size—smaller than an ant’s head—so that they can walk autonomously without being externally controlled.

While Cornell researchers and others have previously developed microscopic machines that can crawl, swim, walk and fold themselves up, there were always “strings” attached; to generate motion, wires were used to provide electrical current or laser beams had to be focused directly onto specific locations on the robots.

“Before, we literally had to manipulate these ‘strings’ in order to get any kind of response from the robot,” said Itai Cohen, professor of physics. “But now that we have these brains on board, it’s like taking the strings off the marionette. It’s like when Pinocchio gains consciousness.”

The innovation sets the stage for a new generation of microscopic devices that can track bacteria, sniff out chemicals, destroy pollutants, conduct microsurgery and scrub the plaque out of arteries.

The project brought together researchers from the labs of Cohen, Alyosha Molnar, associate professor of electrical and computer engineering; and Paul McEuen, professor of physical science, all co-senior authors on the paper. The lead author is postdoctoral researcher Michael Reynolds.

The “brain” in the new robots is a complementary metal-oxide-semiconductor (CMOS) clock circuit that contains a thousand transistors, plus an array of diodes, resistors and capacitors. The integrated CMOS circuit generates a signal that produces a series of phase-shifted square wave frequencies that in turn set the gait of the robot. The robot legs are platinum-based actuators. Both the circuit and the legs are powered by photovoltaics.

“Eventually, the ability to communicate a command will allow us to give the robot instructions, and the internal brain will figure out how to carry them out,” Cohen said. “Then we’re having a conversation with the robot. The robot might tell us something about its environment, and then we might react by telling it, ‘OK, go over there and try to suss out what’s happening.'”

The new robots are approximately 10,000 times smaller than macroscale robots that feature onboard CMOS electronics, and they can walk at speeds faster than 10 micrometers per second.

The fabrication process that Reynolds designed, basically customizing foundry-built electronics, has resulted in a platform that can enable other researchers to outfit microscopic robots with their own apps—from chemical detectors to photovoltaic “eyes” that help robots navigate by sensing changes in light.

“What this lets you imagine is really complex, highly functional microscopic robots that have a high degree of programmability, integrated with not only actuators, but also sensors,” Reynolds said. “We’re excited about the applications in medicine—something that could move around in tissue and identify good cells and kill bad cells—and in environmental remediation, like if you had a robot that knew how to break down pollutants or sense a dangerous chemical and get rid of it.”

Denial of responsibility! TechNewsBoy.com is an automatic aggregator around the global media. All the content are available free on Internet. We have just arranged it in one platform for educational purpose only. In each content, the hyperlink to the primary source is specified. All trademarks belong to their rightful owners, all materials to their authors. If you are the owner of the content and do not want us to publish your materials on our website, please contact us by email – [email protected]. The content will be deleted within 24 hours.
autonomouslybrainsElectronicgadget updatemicrorobotsSmarttech boytech news
Share FacebookTwitterGoogle+ReddItWhatsAppPinterestEmail