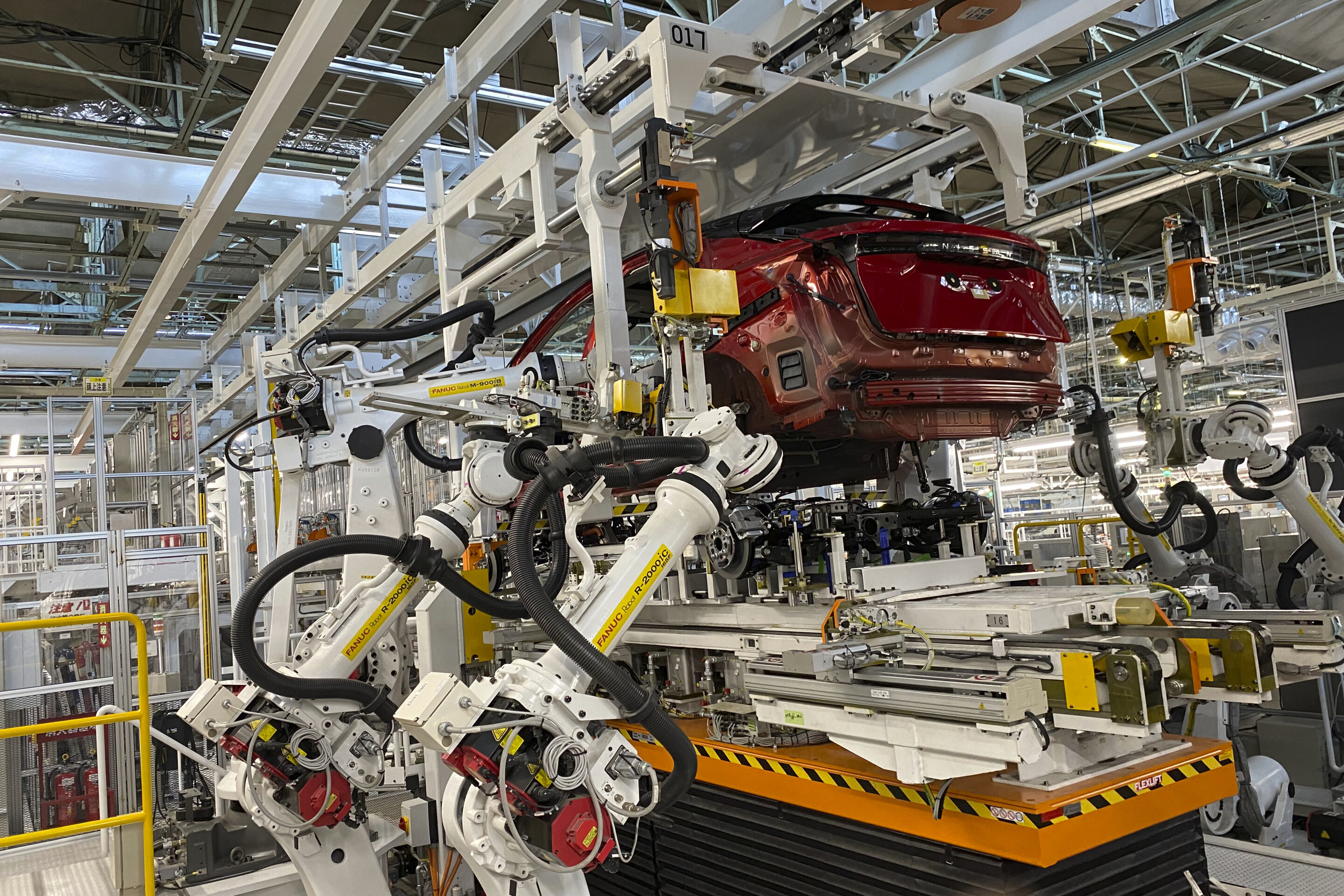 Smart robots do all the work at Nissan’s ‘intelligent’ plant

Nissan’s “intelligent factory” hardly has any human workers. The robots do the work, including welding and mounting. They do the paint jobs and inspect their own paint jobs.

“Up to now, people had to make production adjustments through experience, but now robots with artificial intelligence, analyzing collected data, are able to do it. The technology has developed to that level,” Nissan Executive Vice President Hideyuki Sakamoto said during a tour of the production line for the Ariya sport-utility vehicle at its Tochigi plant Friday.

The factory, on the outskirts of Tokyo, is set to be up and running sometime before April, according to Nissan Motor Co.

Its assembly line is designed so that all three types of models—electric; e-Power, which has both a motor and an engine, and those powered by regular combustion engine—can be built on the same line. Each vehicle is equipped with the right powertrain as it moves along the line.

The workers at the factory can focus on more skilled work such as analyzing data collected by the robots, and on maintaining the equipment.

All automakers are working on robotic technology that can increase adaptability and enable them to respond quickly to market demand.

During the tour, giant mechanical arms equipped with large displays shone light from the displays on to the car’s surfaces from various angles so that cameras could detect the tiniest flaws.

A mechanism quickly wound wires around a metal object that looked like a giant spool, a motor part that Nissan is using to replace magnets now used in electric vehicles. The company says the innovation eliminates the need for rare earth materials, cutting costs.

Nissan said the innovations being tested in Tochigi will be gradually rolled out at its other global plants, including French alliance partner Renault’s factories.

Sakamoto said it was difficult to estimate exactly how much the fully automated assembly line will save.

But he said manufacturing needs to adapt to labor shortages, to the coronavirus pandemic and to lower carbon emissions to help mitigate climate change.

Nissan says that by 2050 it hopes to achieve carbon neutrality across its operations and the life cycle of its products, which includes raw material extraction, manufacturing, use and recycling.

A new kind of paint that enables vehicles’ bodies and bumpers to be simultaneously painted and baked reduces energy consumption by 25%, the company says.

Before, vehicle bodies, which are aluminum, and plastic bumpers had to be painted separately at different temperatures.

Nissan is expecting to regain profitability in this fiscal year, but like other automakers, it is contending with parts shortages caused by the pandemic. Its brand took a hit from a scandal centered on its former chairman, Carlos Ghosn, who was arrested in Japan on financial misconduct charges in 2018.

Nissan invests in production to prepare for electric age

Citation:
Smart robots do all the work at Nissan’s ‘intelligent’ plant (2021, October 8)
retrieved 8 October 2021
from https://techxplore.com/news/2021-10-smart-robots-nissan-intelligent.html

Denial of responsibility! TechNewsBoy.com is an automatic aggregator around the global media. All the content are available free on Internet. We have just arranged it in one platform for educational purpose only. In each content, the hyperlink to the primary source is specified. All trademarks belong to their rightful owners, all materials to their authors. If you are the owner of the content and do not want us to publish your materials on our website, please contact us by email – [email protected]. The content will be deleted within 24 hours.
gadget updateintelligentNissansplantrobotsSmarttech boytech news
Share FacebookTwitterGoogle+ReddItWhatsAppPinterestEmail