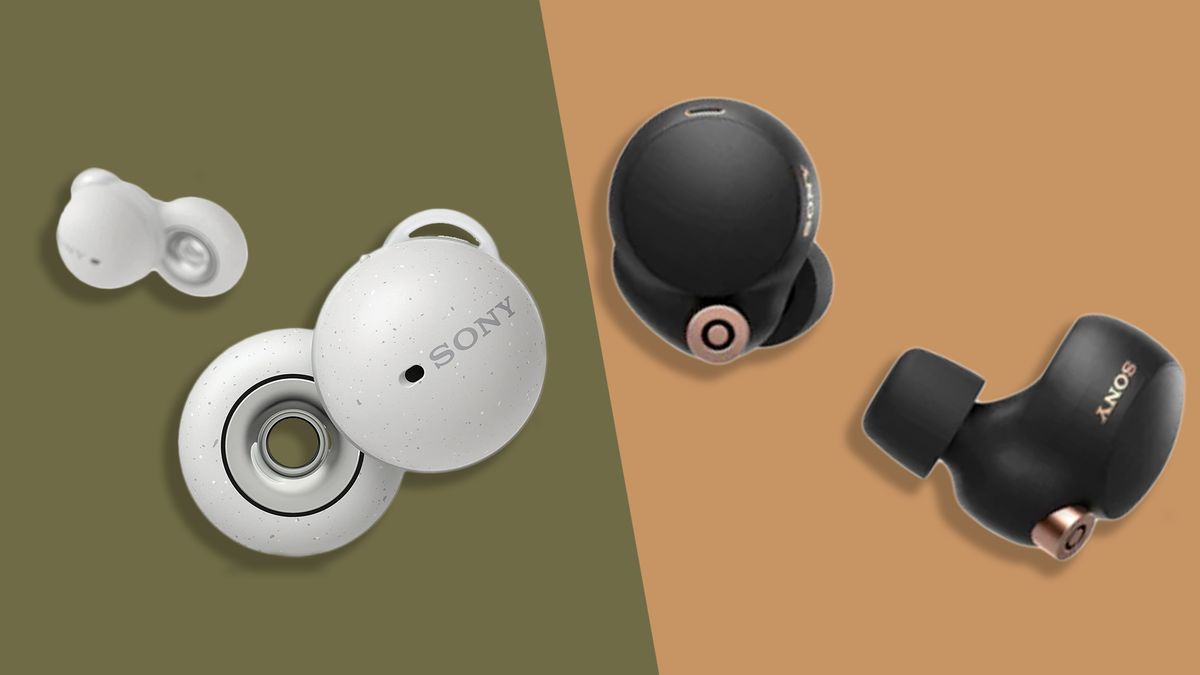 Sony has garnered a reputation for making the best true wireless earbuds you can buy today, combining excellent audio quality with extra features like touch-sensitive controls and active noise cancellation at a competitive price.

The Sony WF-1000XM4 are our favorite wireless earbuds on the market, having launched in 2021 with many of the same features as the over-ear WH-1000XM4.

Since then, Sony has released a new pair of wireless earbuds – and they’re very different from the WF-1000XM4. The Sony LinkBuds are the strangest in-ear headphones we’ve ever seen, with a ring-shaped open driver design that leaves your ear canals totally exposed.

Unlike the WF-1000XM4, the Sony LinkBuds are designed to be worn all day long, allowing you to hear your surroundings while you enjoy your music, take calls or listen to podcasts. The company took a big gamble on this unique design, but we think the risk has paid off.

Both the Sony WF-1000XM4 and the LinkBuds are excellent examples of how far true wireless earbuds have come in the last few years, and we’d happily recommend either model. Unfortunately, that makes choosing between the two quite difficult.

That’s why we’ve taken a deep dive into the Sony WF-1000XM4 and the LinkBuds to see how they compare. Here’s everything you need to know about how Sony’s best earbuds stack up against its strangest.

Both the Sony LinkBuds and the WF-1000XM4 are true wireless earbuds, with no cable between each earbud. A charging case tops up the battery while keeping the earbuds themselves safe.

That’s because the Sony LinkBuds are the first in-ear headphones to feature an open design that leaves your ears free to hear the world around you. Traditional earbuds block the ear canals, but the LinkBuds’ ring-shaped drivers keep the ear canals uncovered.

Those ring-shaped drivers are connected to rounded housings in a figure of eight-style configuration. The housings rest in the concha of your ears, held in place by rubber fins, which come in a range of sizes.

Although the LinkBuds are far smaller than the Sony WF-1000XM4, we didn’t find them as comfortable. That’s not a reflection of poor design, however – our ears just don’t get on with this particular form factor.

The Sony WF-1000XM4 and their charging case look rather large by comparison, with flat, circular housings connected to polyurethane ear tips.

Both models come with an IPX4 water-resistance rating, which means they can withstand a little sweat or rain, making them suitable for use while working out. The LinkBuds and the WF-1000XM4 also both come in black or silver color options, and feature paper-based recycled packaging. The LinkBuds take the eco-friendly credentials one step further and are partially made from recycled car parts.

Both the Sony LinkBuds and the Sony WF-1000XM4 come with touch-sensitive controls, allowing you to tap the housings of the earbuds to control your music playback, accept calls, and summon your device’s voice assistant.

However, the LinkBuds have a few extra tricks up their sleeve. As they’re so small, tapping the LinkBuds’ housings accurately can be difficult so Sony has implemented a feature it calls Wide Area Tap.

This ingenious feature means you can tap the area in front of your ears to control the LinkBuds – that’s right, you just need to tap your face to play / pause your music or skip to the next track.

These controls can be reconfigured to your liking in the Sony Headphones Connect app – whichis where you’ll set up both the WF-1000XM4 and the LinkBuds when you first use them.

The app is feature-rich, allowing you to easily customize your earbuds, check on your battery life, download updates, and toggle EQ and noise cancellation settings.

The level of personalization you get with the app is great, and in the case of the LinkBuds, you even get a handy animation that shows you how to wear them properly. You can also enable Sony’s 360 Reality Audio technology in the Headphones Connect app, which requires you to take a photo of each ear. The app then analyzes your ear shape for an immersive sound that’s tailored to you.

Both the Sony LinkBuds and the Sony WF-1000XM4 offer exceptional audio performances, with support for the company’s DSEE upscaling technology, automatic pausing when you remove your earbuds, and 360 Reality Audio, which allows for immersive virtual surround sound.

The LinkBuds in particular provide a remarkably wide soundstage, with the open-fit 12mm ring drivers creating an expansive sound that allows every instrument in your favorite songs to shine.

That open design means you don’t get the powerful bass response offered by earbuds that create a strong seal against the ear canal; however, the LinkBuds are so well-balanced that the mids and trebles don’t sound bloated in comparison to the lower frequencies.

The Sony WF-1000XM4 provide a more bass-heavy sound but don’t sound quite as expansive. You still get excellent dynamism and control though, with both the XM4 and the LinkBuds providing high levels of detail and rhythmic accuracy.

You may find that the Sony WF-1000XM4 sound more immersive thanks to their physical seal against the outside world and active noise cancellation technology, which blocks out the sound of your environment. The WF-1000XM4 also come with support for hi-res audio via Sony’s LDAC codec. DSEE may upscale music played on the LinkBuds to ‘near’ hi-res quality, but it’s not the same as true 24-bit / 192kHZ streams.

There’s no noise cancellation (physical or active) on offer with the LinkBuds; these earbuds are designed to be worn all day long, allowing you to hear what’s going on around you while you listen to music.

Of the two models, the Sony WF-1000XM4 come with the longest battery life. You get 24 hours in total, with 8-12 hours of playback provided by the earbuds themselves. If you have active noise cancellation turned on, you can expect a shorter battery life.

The LinkBuds only offer 17.5 hours of battery life; that’s 5.5 hours from the earbuds and a further 12 hours from the charging case. The Sony Headphones Connect App also warns that battery life could be lower if you have features like Speak-to-Chat, DSEE, and Adaptive Volume Control all turned on at once.

While the LinkBuds and the WF-1000XM4 both support Quick Charging, which lets you top the earbuds up rapidly when you’re in a hurry, only the WF-1000XM4 comes with support for wireless charging.

Both models come with Bluetooth 5.2 connectivity, which provides a stable connection with your devices. We found that the LinkBuds sometimes dropped out when we left our phone in another room – physical barriers like walls can interfere with Bluetooth, but the issue seemed particularly prominent with the LinkBuds.

Neither model comes with multipoint connectivity for quickly switching between playback devices; that’s a shame, considering how comprehensively specced both Sony earbuds are.

If you’re trying to choose between the Sony LinkBuds and the WF-1000XM4, your first question should be ‘how do I intend to use my new earbuds?’.

For anyone that wants a pair of true wireless earbuds that can be worn all day to listen to music, take calls, and enjoy podcasts, the LinkBuds give you flexibility of an open design along with an exceptional audio performance. The unique build will also appeal to anyone that wants to try something new.

However, if you want to block out the world around you as you listen to music, the Sony WF-1000XM4 are your best bet, offering great active noise cancellation and an immersive sound that’ll let you get the best out of your music. Plus, they come with hi-res audio support so you can enjoy high-quality music streams.

If you want wireless charging support, you should also opt for the WF-1000XM4 – and the longer battery life will suit anyone who frequently forgets to top up their wireless earbuds.

In the end, your decision may come down to price – and in this respect, the LinkBuds are the clear winners, costing $100 / £100 / AU$150 less than their noise-canceling counterparts. There are plenty of cheaper earbuds on the market if the LinkBuds are still too pricey; for instance, the 2019 AirPods are frequently discounted these days and offer lots of similar features – though Apple’s earbuds can’t compete with Sony’s when it comes to audio quality.

Denial of responsibility! TechNewsBoy.com is an automatic aggregator around the global media. All the content are available free on Internet. We have just arranged it in one platform for educational purpose only. In each content, the hyperlink to the primary source is specified. All trademarks belong to their rightful owners, all materials to their authors. If you are the owner of the content and do not want us to publish your materials on our website, please contact us by email – [email protected]. The content will be deleted within 24 hours.
compareEarbudsgadget updateLinkbudsSonytech boytech newstech news boy
Share FacebookTwitterGoogle+ReddItWhatsAppPinterestEmail

How to Find Games That Are Compatible With the Steam Deck

Tabletop Game Companies Are Rushing to Snatch Up Hollywood Names