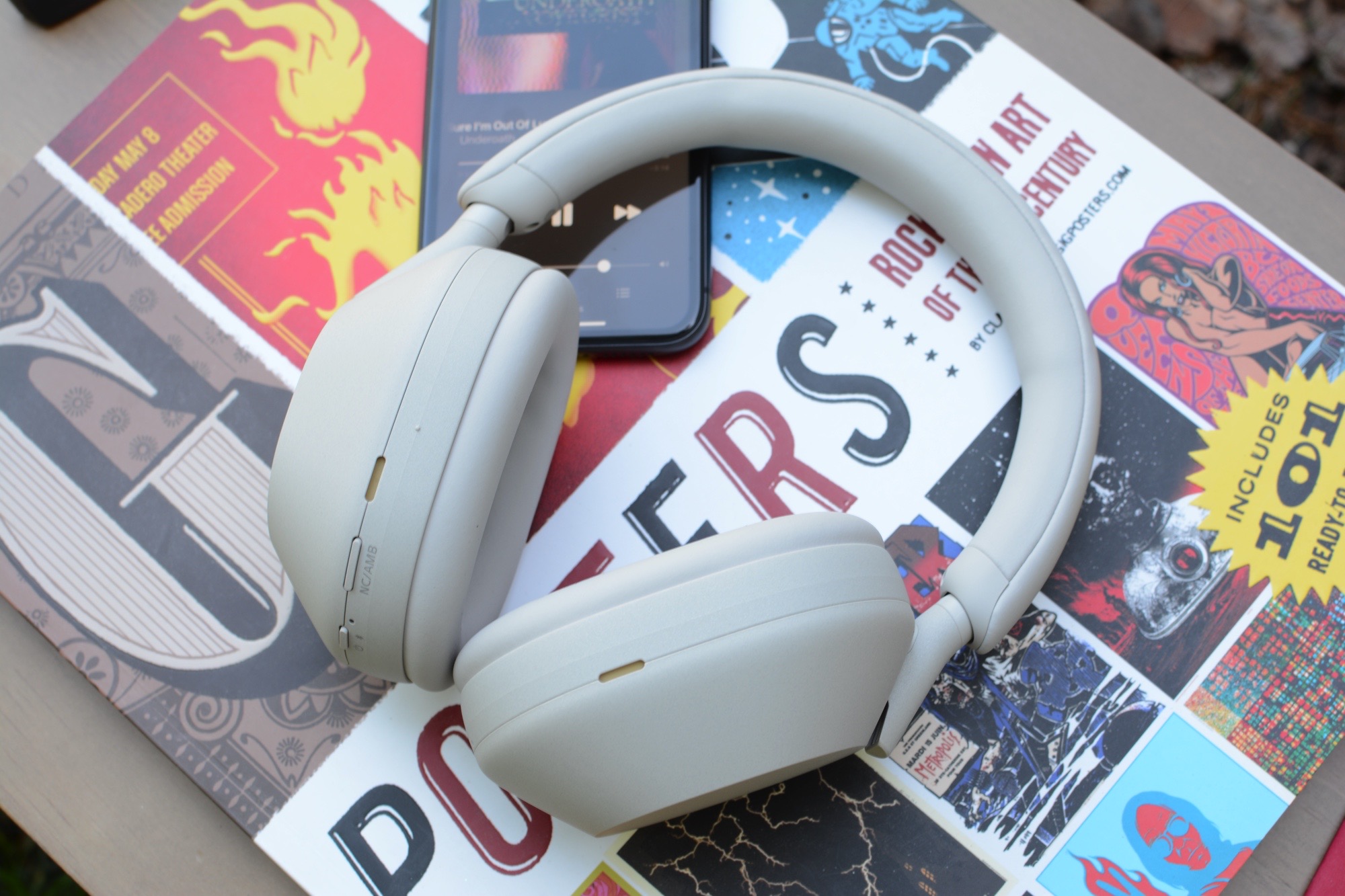 The rumors were (mostly) true. Sony did indeed have a follow-up to its stellar WH-1000XM4 ready for a proper debut. Today the company announced the WH-1000XM5 ($400), its latest flagship noise-canceling headphones equipped with all of the things we’ve come to expect from Sony’s 1000X line. This time around the company gave its premium cans a big exterior redesign. In the process, it massively increased comfort while also expanding the incredible performance in terms of noise cancelation and overall sound quality.

One of the biggest changes for the 1000XM5 is the design. Sony slimmed down the headband while keeping the underside soft and cushiony. My only gripe with the new look is that you can see where the housing for the adjustable arms ends and the softer padding begins. You only see it when you take the headphones off, but it’s noticeable.

Sony also connects the headband to the ear cups in one spot on the M5, rather than the U-shaped bracket that mounted to the M4 in two places. There’s still plenty of swivel and rotation for the ear cups, so there’s no sacrifice to movement. In fact, I’d argue these changes give this new 1000X a more modern look, than all of the previous models. The lineup has a similar design up through the M4, so Sony was overdue for a big overhaul.

Despite only being four grams or 0.14 ounces lighter than the WH-1000XM4, this new version feels like it weighs a lot less when you put them on. The weight distribution is better, plus the synthetic leather ear cups are quite cushiony. I had no problem wearing these for hours at a time and at no point did I feel pressure around my ears or on the top of my head.

The outside panel of the right ear cup still houses the touch controls. Here you can play/pause with a double tap, skip tracks with a horizontal swipe or swipe vertically to adjust volume. Tap and hold summons your voice assistant and when you get a call, simply double tap to answer. All of those touch controls work well too, reliably accepting taps and swipes without error. On the edge of the left ear cup, there are physical buttons for power and noise cancellation. The former can also put the headphones in pairing mode and give you a battery level update while the latter cycles through a combination of ANC, ambient sound and off.

As is the case with most of Sony’s earbuds and headphones, the Headphones Connect app is where you tweak settings and enable a host features. When you fire up the software, a battery life percentage is prominently displayed on the right side, with tabs for Status, Sound, System and Services just below. The first, Status, gives you access to the finer details of Adaptive Sound Control or Sony’s handy automatic switching of noise canceling settings based on activity or location.

Of course, if you choose to have things change based on where you are, you’ll have to give the app permission to track your whereabouts. If you do, you can set the M5 to automatically enable ambient sound when you’re at the office, for example. Adaptive Sound Control can also be configured to change the EQ and enable/disable Speak-to-Chat for a particular location or activity.

The Status panel will also allow you to see which devices are currently connected since the M5 allows you to link up to two simultaneously. And lastly there’s a media player here, which I’ve never touched across several reviews. The Sound tab gives you access to Ambient Sound Control, the ability to enable/disable Speak-to-Chat, the equalizer and audio presets. If you recall, Speak-to-Chat automatically pauses the audio and activates ambient sound when it detects that you’re speaking. In my experience, it could sometimes be fooled by coughs, but that’s not the case anymore. You can also configure the headphones for 360 Reality audio, in addition to switching Bluetooth connection quality and employing DSEE Extreme. That latter uses AI to reproduce the frequency response that’s typically lost to compression.

System is where you can enable multipoint connectivity, change voice assistants, disable the touch control panel and add functionality to the noise canceling button. You can also opt for that last control to activate Spotify Tap with either a double or triple press. And last but not least, Services is where you connect various apps for easy access. If you want to use Spotify Tap, for example, you’ll need to sync it with Headphones Connect here.

Sound quality has never been an issue with the 1000X line, and it’s definitely not on the M5. In fact, it’s yet another thing Sony upgraded on these headphones. New 30mm carbon fiber drivers handle the audio, including tracks in LDAC and DSEE Extreme. I thought the M4 was well-tuned for a range of genres, but the bass seems punchier here. Whether it’s the electronic collisions of The Glitch Mob, the grungy blues of Jack White or the driving bass in Kendrick Lamar’s catalog, the lower range is both pleasant and powerful, expanding the overall soundstage.

The difference between the M4 and the M5 is in the finer details. There’s more depth, making everything seem more immersive. But there’s also more clarity, so the subtleties can shine. I’m talking about things like the texture of someone strumming an acoustic guitar or Jack White’s iconic distortion soaring above the other instruments. Everything is still balanced, and the bass only provides the proper amount of oomph. Switch over to something entirely acoustic like bluegrass and the bass remains in check so the picking, and the highs, can cut through unhindered.

What’s more, activating DSEE Extreme doesn’t make a huge difference in the sound quality. On other Sony devices, that algorithm’s ability to recover some of the detail lost to compression makes a noticeable impact. On the M5, the results are subtle, and on some songs I had a hard time picking up on any change at all. It’s quite impressive.

I only have one complaint about sound quality, and it may actually be a Bluetooth issue rather than a true audio problem. When listening to music or watching a video on my MacBook Pro, I would occasionally experience quick dropouts or skips. It didn’t happen often and, oddly, I never heard it when playing something on my iPhone. The audio stutters a bit just for a second, like you’re watching a video on a bad internet connection, and then it continues. I tested both WH-1000XM5 units sent to me and noticed the issue on both. I’ve reached out to Sony for more info on the potential cause.

Denial of responsibility! TechNewsBoy.com is an automatic aggregator around the global media. All the content are available free on Internet. We have just arranged it in one platform for educational purpose only. In each content, the hyperlink to the primary source is specified. All trademarks belong to their rightful owners, all materials to their authors. If you are the owner of the content and do not want us to publish your materials on our website, please contact us by email – [email protected]. The content will be deleted within 24 hours.
Engadgetgadget updateReviewSonytech boytech newstech news boytech update
Share FacebookTwitterGoogle+ReddItWhatsAppPinterestEmail

Samsung’s freebie bundles are great, so why…