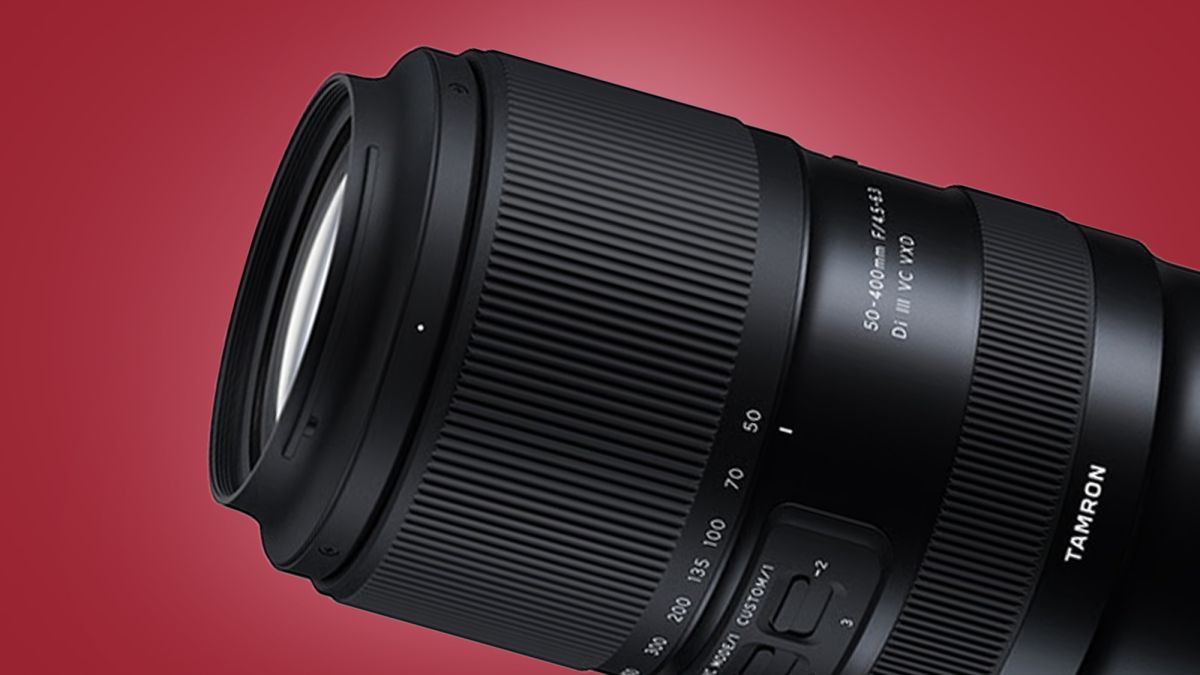 If you’re a Sony camera owner who’s been looking for one super-versatile zoom lens for almost any shooting situation, you’re in luck – Tamron has announced that it’s working on a 50-400mm lens that’ll be released for E-mount later this year.

The Tamron 50-400mm f/4.5-6.3 Di III VC VXD, to give it its full name, covers an unusually broad spectrum of focal lengths. At the wide end, 50mm is ideal for street photography or portraits, while 400mm will cover you for sports and wildlife.

While the lens is designed for full-frame cameras like the Sony A7 IV, you could also mount it on an APS-C body for even more reach. Pair it with a camera like the Sony A6600 and you’d get the equivalent of a 75-600mm lens.

Tamron hasn’t revealed the full specs of the lens yet (or crucially, its price). But we do know that it’ll be able to focus on objects as close as 25cm away at the 50mm end and that it’ll have the company’s VXD (Voice-coil eXtreme-torque Drive) linear autofocus mechanism, which we’ve seen work nicely (and quietly) in previous lenses like the Tamron 70-180mm f/2.8 VXD.

The only bad news is that we could be in for a little wait for the lens. Tamron says the 50-400mm f/4.5-6.3 Di III VC VXD will be available during ‘Fall 2022’ (or between September-November, for those in the southern hemisphere). But it did also add that “due to the current global health crisis, the release date or product supply schedule could change”.

So far, the lens has only been announced for the Sony E-mount, but we’ve asked Tamron if it’s also being developed for others like the Fujifilm X-mount cameras (despite the fact that they have APS-C sensors) and will update this story when we hear back.

Most 400mm super-telephoto lenses offer a relatively narrow 100mm focal length at their widest end, which restricts them to shooting distant subjects like wildlife. But this intriguing lens starts at an unusually wide 50mm, making it a potentially brilliant travel companion.

Its appeal could be limited by its price tag, which isn’t yet clear, and Tamron didn’t sound too confident that it’d be able to hit that “fall 2022” launch date. But if you’re a Sony fan who likes the idea of a super-versatile lens that could cover portraits, landscapes, and general travel shooting, it could be worth the wait.

It’s unlikely to be able to match the outright image quality of more specialized lenses, like Sony’s own 100-400mm G Master. But given Tamron’s history of building more affordable lenses, it should also be considerably cheaper than that super-telephoto, too.

While it’s only initially being made for Sony E-mount, it’s possible that Tamron could adapt the 50-400mm f/4.5-6.3 Di III VC VXD for other mounts. Canon and Nikon sadly haven’t shown any great appetite for bringing third-party autofocus lenses to their RF and Z mounts, but Tamron has started making lenses for Fujifilm’s X-mount.

The slight hindrance is that this lens is designed for full-frame cameras, rather than APS-C ones like Fuji’s X-mount. Some adaptation would be required, then, but it could double as a very handy 75-600mm lens on Fuji’s cameras, if Tamron did ever decide to make the leap.

Denial of responsibility! TechNewsBoy.com is an automatic aggregator around the global media. All the content are available free on Internet. We have just arranged it in one platform for educational purpose only. In each content, the hyperlink to the primary source is specified. All trademarks belong to their rightful owners, all materials to their authors. If you are the owner of the content and do not want us to publish your materials on our website, please contact us by email – [email protected]. The content will be deleted within 24 hours.
camerasgadget updateLensmirrorlessruleSonyssuperzoomtech boy
Share FacebookTwitterGoogle+ReddItWhatsAppPinterestEmail

Explained: How Microsoft Edge Disk Caching will help in improving the browser’s performance – Times of India

How do you teach younger students computer science?

A United Airlines pilot made a big speech to passengers. Not…