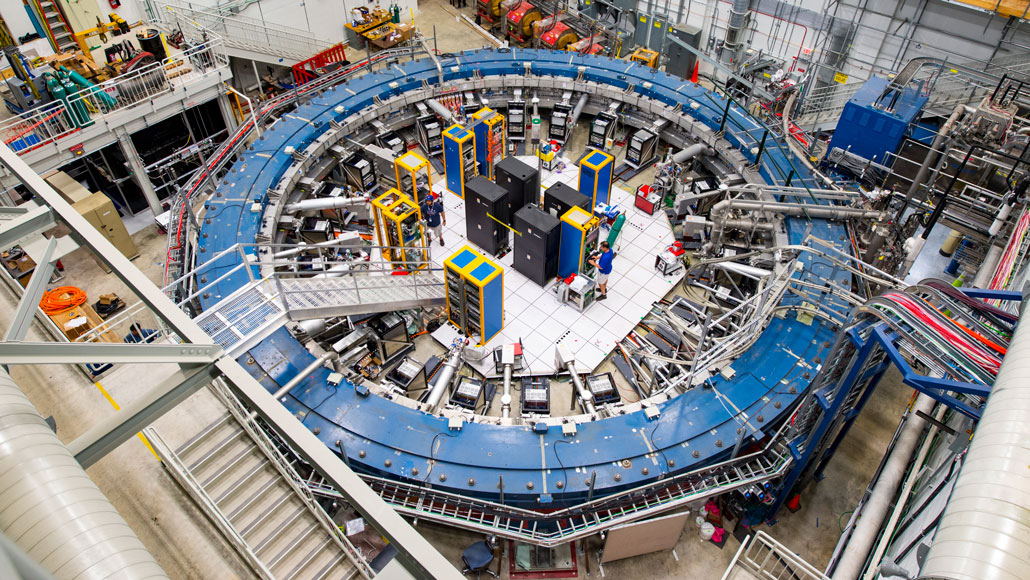 In a painstakingly precise experiment, muons’ gyrations within a magnetic field seem to defy predictions of the standard model of particle physics, which describes known fundamental particles and forces. The result strengthens earlier evidence that muons, the heavy kin of electrons, behave unexpectedly.

“It’s a very big deal,” says theoretical physicist Bhupal Dev of Washington University in St. Louis. “This could be the long-awaited sign of new physics that we’ve all hoped for.”

Muons’ misbehavior could point to the existence of new types of particles that alter muons’ magnetic properties. Muons behave like tiny magnets, each with a north and south pole. The strength of that magnet is tweaked by transient quantum particles that constantly flit into and out of existence, adjusting the muon’s magnetism by an amount known as the muon magnetic anomaly. Physicists can predict the value of the magnetic anomaly by considering the contributions of all known particles. If any fundamental particles are in hiding, their additional effects on the magnetic anomaly could give them away.

Muons and electrons share a family resemblance, but muons are about 200 times as massive. That makes muons more sensitive to the effects of hypothetical heavy particles. “The muon kind of hits the sweet spot,” says Aida El-Khadra of the University of Illinois at Urbana-Champaign.

To measure the magnetic subtleties of the muon, physicists flung billions of the particles around the huge, doughnut-shaped magnet of the Muon g−2 experiment at Fermilab in Batavia, Ill. (SN: 9/19/18). Inside that magnet, the orientation of the muons’ magnetic poles wobbled, or precessed. Notably, the rate of that precession diverged slightly from the standard model expectation, physicists report April 7 in a virtual seminar, and in a paper published in Physical Review Letters.

“This is a really complex experiment,” says Tsutomu Mibe of the KEK High Energy Accelerator Research Organization in Japan. “This is excellent work.”

To avoid bias, the team worked under self-imposed secrecy, keeping the final number hidden from themselves as they analyzed the data. At the moment the answer was finally revealed, says physicist Meghna Bhattacharya of the University of Mississippi in Oxford, “I was having goose bumps.” The researchers found a muon magnetic anomaly of 0.00116592040, accurate to within 46 millionths of a percent. The theoretical prediction pegs the number at 0.00116591810. That discrepancy “hints toward new physics,” Bhattacharya says.

A previous measurement of this type, from an experiment completed in 2001 at Brookhaven National Laboratory in Upton, N.Y., also seemed to disagree with theoretical predictions  (SN: 2/15/01). When the new result is combined with the earlier discrepancy, the measurement diverges from the prediction by a statistical measure of 4.2 sigma — tantalizingly close to the typical five-sigma benchmark for claiming a discovery. “We have to wait for more data from the Fermilab experiment to really be convinced that this is a real discovery, but it is becoming more and more interesting,” says theoretical physicist Carlos Wagner of the University of Chicago.

According to quantum physics, muons are constantly emitting and absorbing particles in a frenzy that makes theoretical calculations of the magnetic anomaly extremely complex. An international team of more than 170 physicists, co-led by El-Khadra, finalized the theoretical prediction in December 2020 in Physics Reports.

Many physicists believe that this theoretical prediction is solid, and unlikely to budge with further investigation. But some debate lingers. Using a computational technique called lattice QCD for a particularly thorny part of the calculation gives an estimate that falls closer to the experimentally measured value, physicist Zoltan Fodor and colleagues report April 7 in Nature. If Fodor and colleagues’ calculation is correct, “it could change how we see the experiment,” says Fodor, of Pennsylvania State University, perhaps making it easier to explain the experimental results with the standard model. But he notes that his team’s prediction would need to be confirmed by other calculations before being taken as seriously as the “gold standard” prediction.

As theoretical physicists continue to refine their predictions, experimental estimates will improve too: Muon g−2 (pronounced gee-minus-two) physicists have analyzed only a fraction of their data so far. And Mibe and colleagues are planning an experiment using a different technique at J-PARC, the Japan Proton Accelerator Research Complex in Tokai, to begin in 2025.

If the discrepancy between experiment and prediction holds up, scientists will need to find an explanation that goes beyond the standard model. Physicists already believe that the standard model can’t explain everything that’s out there: The universe seems to be pervaded by invisible dark matter, for example, that standard model particles can’t account for.

Some physicists speculate that the explanation for the muon magnetic anomaly may be connected to known puzzles of particle physics. For example, a new particle might simultaneously explain dark matter and the Muon g−2 result. Or there may be a connection to unexpected features of certain particle decays observed in the LHCb experiment at the CERN particle physics lab near Geneva (SN: 4/20/17), recently strengthened by new results posted at arXiv.org on March 22.

The Muon g−2 measurement will intensify such investigations, says Muon g−2 physicist Jason Crnkovic of the University of Mississippi. “This is an exciting result because it’s going to generate a lot of conversations.”

Denial of responsibility! TechNewsBoy.com is an automatic aggregator around the global media. All the content are available free on Internet. We have just arranged it in one platform for educational purpose only. In each content, the hyperlink to the primary source is specified. All trademarks belong to their rightful owners, all materials to their authors. If you are the owner of the content and do not want us to publish your materials on our website, please contact us by email – [email protected]. The content will be deleted within 24 hours.
calleddefygadget updatemodelmuonsparticlesphysicsstandard
Share FacebookTwitterGoogle+ReddItWhatsAppPinterestEmail