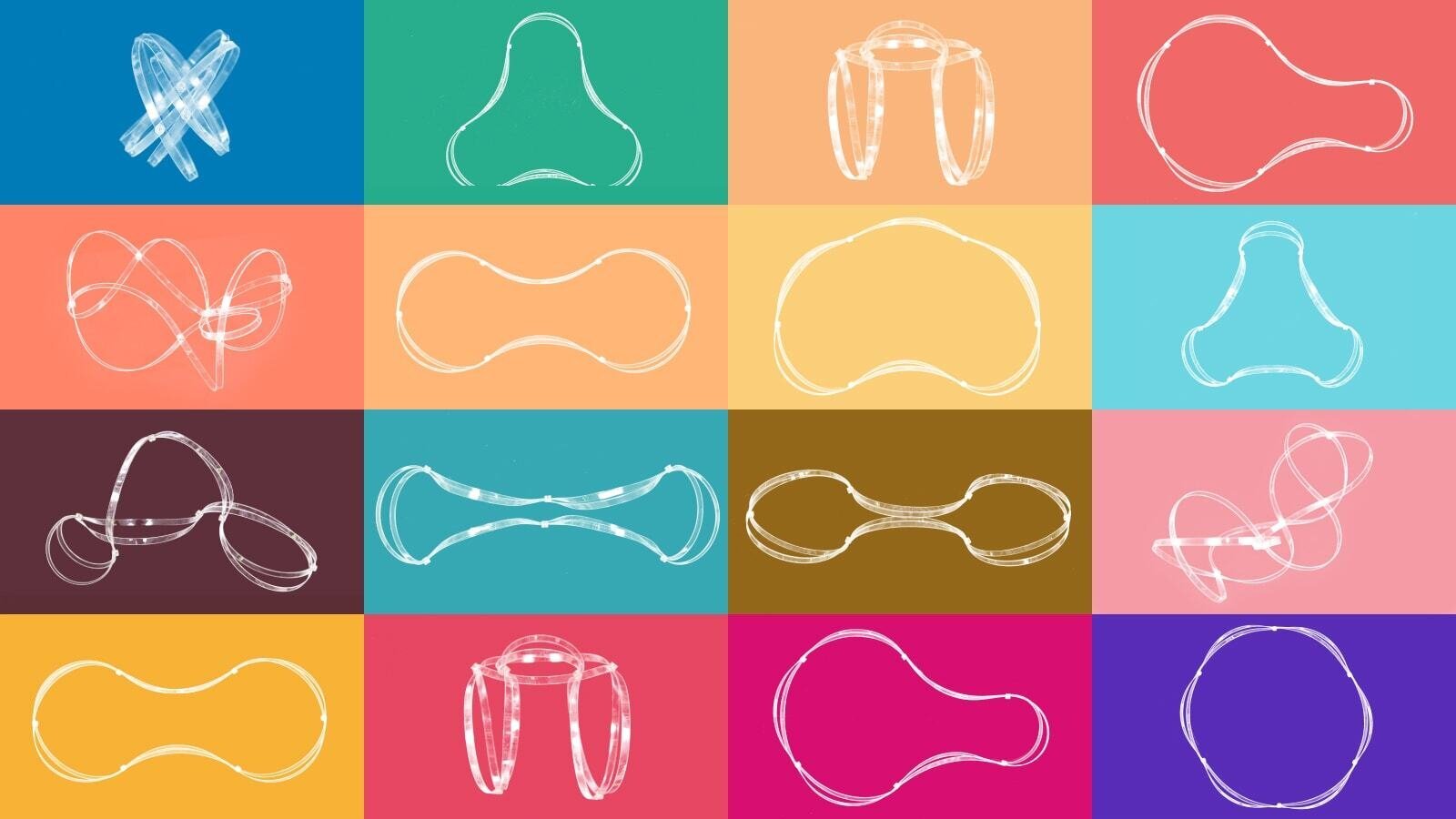 Lauren Dreier was paging through a 19th century book by the German architect Gottfried Semper when she spotted some intriguing patterns inspired by lace. A professional artist and designer who often incorporates technology into her work, Dreier, who is also a doctoral candidate at the School of Architecture at Princeton University, decided to recreate the printed illustrations in 3D.

She grabbed ribbon-like plastic material she had been experimenting with in her studio, bending and connecting the semi-rigid strips. To Dreier’s surprise, the structure she built assumed a bumpy geometry, with four distinct hills and valleys. “I thought it would make a dome, but it was this unusual shape,” Dreier said. Curious to know what caused this unexpected twist, she reached out to Sigrid Adriaenssens, an associate professor in Princeton’s Department of Civil and Environmental Engineering. Adriaenssens couldn’t explain it, either, but she, too, was intrigued. She proposed a joint investigation to find out what was behind the strange structural mechanics.

Dreier’s discovery wound up leading to the creation of a reconfigurable structure the researchers termed a bigon ring. By tweaking the specific design of the structure’s patterns, the team was able to produce multiple geometries that arise from different looping behaviors. According to a paper describing the findings in the Journal of the Mechanics and Physics of Solids, the numerical framework behind the discovery can be applied to any general elastic rod network, whether made of thread, bamboo or plastic. It could also lead to the creation of new products and technologies that are capable of changing shape to improve performance under variable conditions from spacecraft to wearable technology.

“Drawing inspiration from patterns in lacing, I think we can say nobody’s done that before,” Adriaenssens said. “Some of these behaviors were very unexpected, and just by adjusting the angle or the width, you get a totally different behavior.”

To investigate the physics behind these observations, Dreier worked closely with several collaborators, including Tian Yu, a postdoctoral researcher in Adriaenssens’ lab. “This is my first time working with an artist, and I never expected to work on a project inspired by lace,” Yu said. “I’m fascinated by the mechanics part of this project.”

Unlike traditional lace makers who use soft threads twisted together, the researchers arranged their creations into loose, looping formations. “It’s all about creating excess space between the nodes,” Dreier said. The team started by making closed structures called bigons by fixing the ends of two initially straight strips at a certain angle, creating eye- or almond-like forms. Similar to metal hair clips from the 1990s, the bigons exhibited bistability, or two different stable shapes that the structures could toggle between when slight pressure was applied.

From there, the researchers arranged multiple bigons into a chain, and then a loop by connecting their ends. The bistable bigons together created an overall structure that could form numerous possible geometries. The structures were multistable, meaning they were made up of a collection forms each of which could be stable independent of the others. Bigon rings, as they called these new forms, sometimes exhibited a similar folding behavior as a bandsaw blade, looping back on themselves. But their behavior could also be tuned by adjusting the intersection angle and the aspect ratio of the strips that composed the bigons, and by changing the number of bigons that made up the ring.

As Dreier worked on building these structures, Yu created a numerical model specific to them using Kirchhoff rod equations for how a thin, elastic rod behaves when loaded with forces and displacements. The researchers were able to confirm the accuracy of the model by taking measurements from Dreier’s physical creations and comparing the results. The computational model also made it possible to identify different configurations that the bigons or bigon rings might be able to take theoretically. The researchers then tested those mathematical predictions through the physical models to see which equilibria were stable and which were not. “A lot of back and forth came from Tian going deep into the data and saying, “If you make a six-bigon ring at such-and-such an angle, what happens?'” Dreier said.

The team eventually produced a new numerical model that captures multistable behavior, and that the researchers say can be applied to other studies that examine the mechanics of general interlaced elastic networks.

In future work, the team plans to conduct a more extensive investigation of the many shapes that bigon-based structures are capable of forming, and how to best achieve specific target shapes. Eventually, their findings could lead to new designs for materials that need to be packed to take up as little room as possible, but that assume a much larger form when unpacked. “For example, materials and structures that go into space have to be folded into a bundle, put in a rocket and then have to expand into as large a size as possible,” Adriaenssens said. “Some of these combinations of parameters do that.”

Other potential real-world applications include novel soft robotic arms, toys and wearable technology. The latter, for example, could include special textiles that stiffen to support someone’s arm in a certain position, and loosen in others. “It can envelop things or not, stiffen or not,” Adriaenssens said. “It can have many functions.”

In addition to the practical applications of the work, the project also demonstrates the largely untapped value of interdisciplinary collaboration between artists and engineers. While art tends to be driven by intuition and feelings that operate outside of the realm of scientific thinking, “it can lead to discoveries of some interesting phenomena,” Dreier said. “I was really excited that these different worlds could come together in a very relevant way.”

Denial of responsibility! TechNewsBoy.com is an automatic aggregator around the global media. All the content are available free on Internet. We have just arranged it in one platform for educational purpose only. In each content, the hyperlink to the primary source is specified. All trademarks belong to their rightful owners, all materials to their authors. If you are the owner of the content and do not want us to publish your materials on our website, please contact us by email – [email protected]. The content will be deleted within 24 hours.
gadget updateInspiredlacemakingSpacestructurestech boytech news
Share FacebookTwitterGoogle+ReddItWhatsAppPinterestEmail