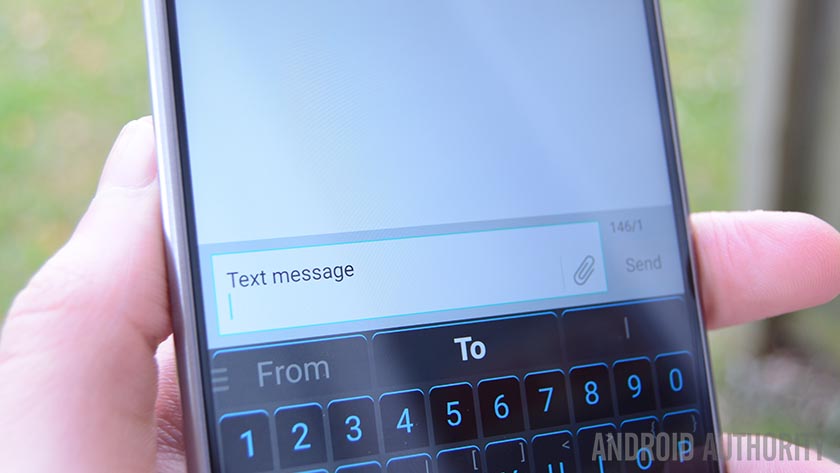 The best texting apps and SMS apps for Android

Text messaging is among the most popular ways to communicate in the whole world. It’s quick, easy to do, and it doesn’t require you to pause what you’re doing like phone calls do. We do understand that many people still prefer the human touch of talking on the phone and we respect that. However, let’s face facts, most people are texting these days. Let’s take a look at the best texting apps and SMS apps for Android. This space hasn’t changed all that much in the last year or two so many of these apps are still the best even if they aren’t the newest.

The best texting apps and SMS apps for Android

Chomp SMS has been around since the good old days of Android and was one of the very first, really good third-party texting apps. It has since evolved into an app that embraces Material Design while still having plenty of features. Some of them include emojis, SMS blocking, quick replies in the notifications, MMS, and group messaging. You can even stop a text mid-send if needed. It also comes with Wear OS and Pushbullet support. It should also work fine with Link to Windows and Android Auto. You’ll likely want to buy out the advertising because it’s kind of annoying, but the SMS part works fine.

We’ll be honest with you. Facebook Messenger isn’t a great app. It uses a ton of battery, storage, and RAM. It also has ads. However, chances are that you have it on your device. Facebook has tons of users, and it’s likely you keep this around because you have those loved ones that just won’t switch to something better. If you’re going to have it around, you might as well enable its SMS support. That way, you can kill two birds with one stone.

It has satisfactory SMS integration, if that helps. We didn’t run into any huge issues while testing it out. Again, this is one of those situations where you’ll probably have to keep this to talk to loved ones, so adding SMS support kind of gives it a little more purpose.

Google Messages (formerly Android Messages) is a free texting app by Google. In terms of features, Android Messages keeps it light. You’ll have some light theming options, some organization and backup features, and a decent search function. The design is entirely Material Design along with Material You. That means it looks good and it’s easy to use.

Google also supports RCS messaging with this app. It’s not great, but it’s a start for RCS fans. This also has a web version for texting on your computer. However, it is a fairly sizable battery drain, so it’s a hit-or-miss kind of feature.

Handcent, along with Chomp SMS, were the first two really good, really popular third-party texting apps available on Android. Much like Chomp SMS, Handcent is a powerful and heavy texting application with a ton of features. Some of them include themes, a privacy box to store private conversations, SMS backup, eCards, emojis, and plenty more. One of the more interesting features is Handcent Anywhere, which lets you text on your computer and tablet if you want. It’s had its ups and downs in terms of bugs, but it’s usually pretty solid.

There is a subscription available, but you only need it if you intend to back up your messages through Handcent.

Link to Windows isn’t an SMS app per se, but it’s one of the most powerful free SMS apps on the Play Store. It lets you link your phone to your Windows computer and send texts from the computer. We like this solution because it’s free, you can do it over Wi-Fi or mobile data, and it works pretty well once you get it up and going. Most of the issues we ran into involve the calling-over-Bluetooth feature, but the text stuff works pretty well. I personally use this every day, and it saves a lot of time from picking up the phone off of my desk.

Most issues involve syncing. You can fix most of them by rebooting your phone and computer. I personally didn’t experience this too often in my two years of usage, but the reboots worked every time.

Pulse SMS is one of the most unique texting apps on the list. It’s like any standard SMS app for the most part. However, there is also a back end that will let you text from your PC, tablet, and other devices. Additionally, it also supports dual-sim devices, blacklisting phone numbers, message backup, and more. Here’s how it works. The texting app part of this is completely free. Those who want to also text from PCs, tablets, etc can either pay $0.99 per month or a lifetime fee of $10.99. It’s a good way to kill two birds with one stone.

Maple Media purchased the app from the original developer in 2020. Unfortunately, they bumped up the prices quite a bit, but at least there is still a lifetime option. Luckily, the SMS portion of the app is still entirely free. You only have to pay if you want to text from other platforms, like PC or back up your messages online.

QKSMS is among the simplest and best SMS apps. It’s open-source, and that’s always a nice touch. Additionally, the app comes with a bunch of features. Some of them include privacy features such as a deny list, Android Wear support, and even some nifty accessibility features. Usage is as you would expect. It’s not going to blow your mind, but its simplicity is appreciated, considering how heavy some texting apps can get. It’s free with no advertising. There are some optional in-app purchases as donations as well.

Signal Private Messenger is actually a messaging app much like WhatsApp, Facebook Messenger, and others. The difference is that this one features end-to-end encryption, and it’s been a favorite of many people who value security. It also works on a phone number system, and if your contact doesn’t have the app, then it simply sends a text message. We really liked how seamless that feature is.

It’s simple to use, looks great with Material Design, and is entirely free to use with no in-app purchases. It’s also open-source, supports group chats, and it’ll even make phone calls. It fills the same kind of role as Facebook Messenger where you can get data messaging and SMS support in the same app. Telegram and WhatsApp don’t have that option as of the time of this writing.

Textra SMS is among the most solid texting apps on the list. This popular and highly stylish SMS app is also one of the highest-rated on the list. It comes with a theme picker (you choose the colors yourself), a dark mode, floating notifications, delayed sending, slide to delete, and plenty of other features. It also comes with direct support for Android Wear, Pushbullet, MightyText, and others. You can use most of the features for free. There is a single in-app purchase for $2.99 to unlock the pro version.

YAATA SMS is an up and comer compared to most of its competition. It has a bunch of features, including group chat support, scheduled message sending, and complete MMS support. If you buy the premium version, you’ll also get SMS blacklisting, an auto-responder, auto-forwarding, and the ability to back up and restore your settings in case you buy a new device. It uses Material Design, and it looks quite good. It also comes with widgets, and it even has chat heads similar to Facebook Messenger. There are some bugs, but most of them aren’t serious.

Thank you for reading. Check these out too:

Denial of responsibility! TechNewsBoy.com is an automatic aggregator around the global media. All the content are available free on Internet. We have just arranged it in one platform for educational purpose only. In each content, the hyperlink to the primary source is specified. All trademarks belong to their rightful owners, all materials to their authors. If you are the owner of the content and do not want us to publish your materials on our website, please contact us by email – [email protected]. The content will be deleted within 24 hours.
AndroidAppsgadget updateSMStech boytech newstech news boytech update
Share FacebookTwitterGoogle+ReddItWhatsAppPinterestEmail

The best speedometer apps for Android