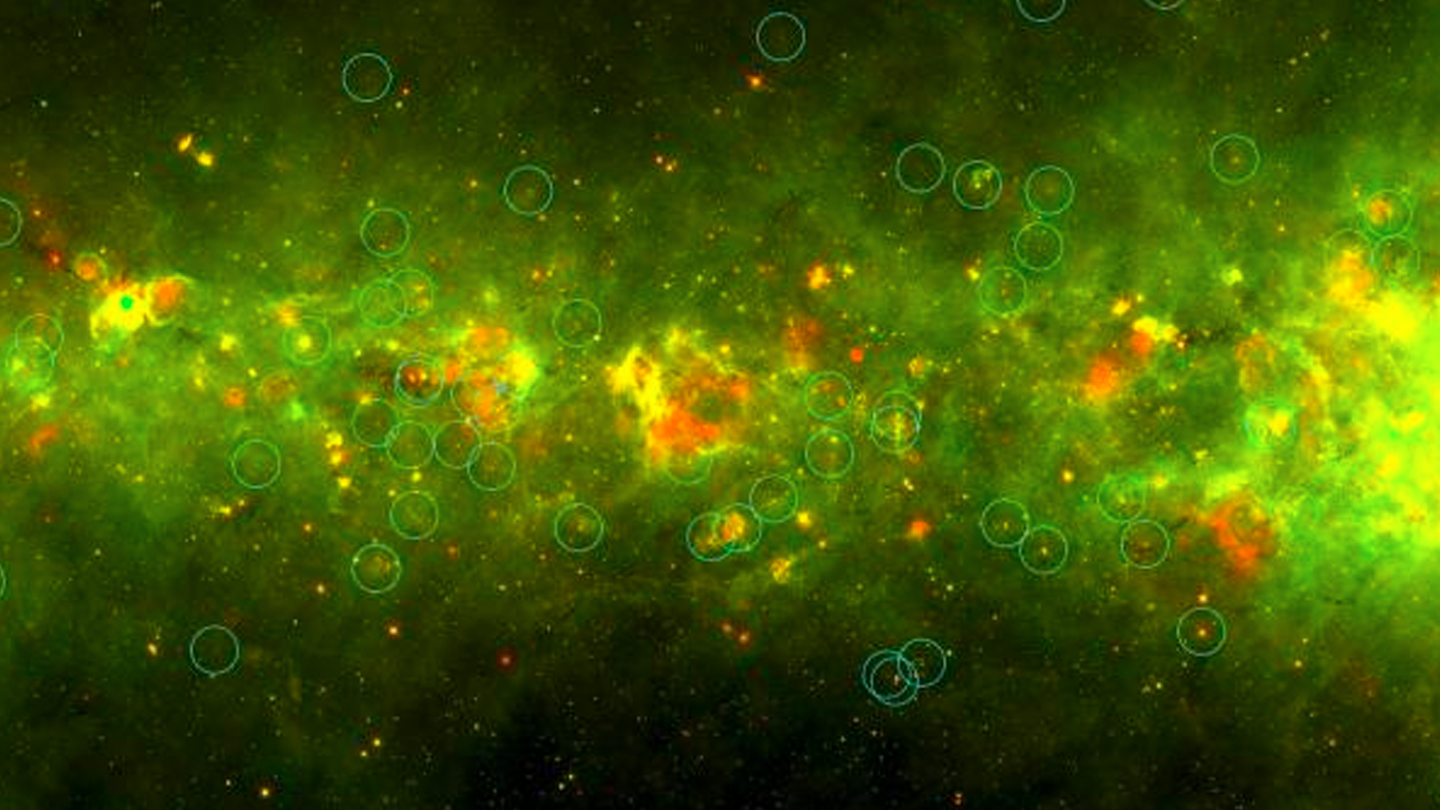 The Milky Way’s mysterious ‘yellowballs’ are clusters of infant stars

Scientists have cracked the case of mysterious cosmic objects dubbed “yellowballs.” The celestial specks mark the birthplaces of many kinds of stars with a wide range of masses, rather than single supermassive stars, researchers report April 13 in the Astrophysical Journal.

The stars in the clusters are relatively young, only about 100,000 years old. “I think of these as stars in utero,” says Grace Wolf-Chase, an astronomer at the Planetary Science Institute who is based in Naperville, Ill. For comparison, the massive stars forming in the Orion nebula are about 3 million years old, and the middle-aged sun is 4.6 billion years old.

Volunteers with the Milky Way Project first identified the objects while scouring pictures of the galaxy taken by the Spitzer Space Telescope. The now-defunct observatory saw the cosmos in infrared light, which let astronomers take a sort of stellar ultrasound “to probe what’s going on in these cold environments before the stars are actually born,” says Wolf-Chase.

Citizen scientists had been looking through these images for baby stars thought to be at least 10 times the mass of the sun that were blowing giant bubbles of ionized gas. A year or two into the project, some users began labeling certain objects with the tag #yellowballs¸ because that’s what they looked like in the false-color images. Between 2010 and 2015, the volunteers found 928 yellowballs.

Wolf-Chase’s team initially thought the balls represented early stage gas bubbles. But because yellowballs were a serendipitous discovery, the researchers knew they probably hadn’t caught enough of them to definitively ID the objects. In 2016, the team asked Milky Way Project volunteers to find more. By the following year, the group had spotted more than 6,000 yellowballs.

Wolf-Chase and colleagues compared about 500 of those balls to existing catalogs of star clusters and other structures to try to figure out what they were. “Now we have a good answer: They’re infant star clusters,” Wolf-Chase says. The clusters blow ionized bubbles of their own, similar to the stellar bubbles blown by single young, big stars.

Wolf-Chase hopes researchers will be able to use the work to pick out yellowballs with telescopes like the James Webb Space Telescope, which is due to launch in October, and figure out more about the balls’ physical properties.

Denial of responsibility! TechNewsBoy.com is an automatic aggregator around the global media. All the content are available free on Internet. We have just arranged it in one platform for educational purpose only. In each content, the hyperlink to the primary source is specified. All trademarks belong to their rightful owners, all materials to their authors. If you are the owner of the content and do not want us to publish your materials on our website, please contact us by email – [email protected]. The content will be deleted within 24 hours.
clustersgadget updateinfantMilkymysteriousstarstech boytech news
Share FacebookTwitterGoogle+ReddItWhatsAppPinterestEmail

Apple WWDC 2021 rumors: What we know and what we don’t know | ZDNet

Hybrid immunity behind difference in Covid numbers of India and China:…

Apple Could Be Exploring Moving Some iPad Production to…

Hybrid immunity behind difference in Covid numbers of India…