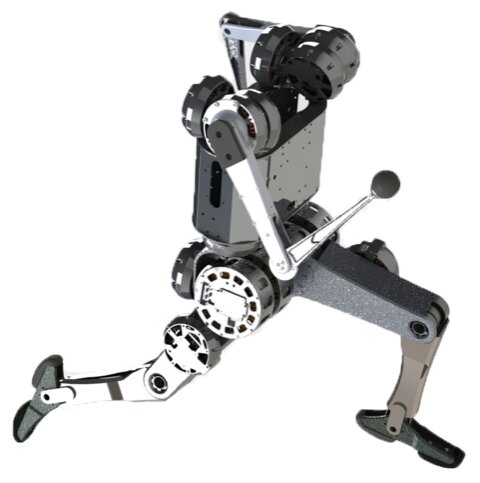 The MIT humanoid robot: A dynamic robotic that can perform acrobatic behaviors

Creating robots that can perform acrobatic movements such as flips or spinning jumps can be highly challenging. Typically, in fact, these robots require sophisticated hardware designs, motion planners and control algorithms.

Researchers at Massachusetts Institute of Technology (MIT) and University of Massachusetts Amherst recently designed a new humanoid robot supported by an actuator-aware kino-dynamic motion planner and a landing controller. This design, presented in a paper pre-published on arXiv, could allow the humanoid robot to perform back flips and other acrobatic movements.

“In this work, we tried to come up with realistic control algorithm to make a real humanoid robot perform acrobatic behavior such as back/front/side-flip, spinning jump, and jump over an obstacle,” Donghyun Kim, one of the researchers who developed the robot’s software and controller, told TechXplore. “To do that, we first experimentally identified the actuator performance and then represent the primary limitations in our motion planner.”

To perform highly dynamic behaviors, robots typically need to make efficient use of actuators. Most existing robot designs, however, do not fully address hardware-related challenges and aspects, such as the drop in voltage that can occur during high torque/velocity motions.

Kim and his colleague developed a new method that can handle the constraints associated with highly dynamic robot behaviors during motion planning and control. Combined with the humanoid robot design they proposed, this method could enable more dynamic movements, such as acrobatics.

“The most notable difference between the new humanoid robot we developed and other humanoid robots developed in the past would be the actuators,” Kim said. “Actuator technologies have been dramatically improved, and we have demonstrated the outstanding performance in the quadruped robots, MIT Cheetah 1, 2, 3 and mini-cheetah robots. The same actuator technology, represented by highly back-drivable, rapid and accurate torque control, and compact and robust form factor, will be used in the new humanoid robot.”

In contrast with other humanoid robots developed in the past, the new robot designed by one of the researchers in the team, called Sangbae Kim, is extremely dynamic and efficient. This should allow it to complete more demanding and complex tasks.

“Performing dynamic motions is challenging for robots because their operator must first understand the correlation between hardware and software,” Donghyun Kim said. “In this work, we tried to address the critical hardware limits at dynamic motion in our control algorithm based on the accumulated experience and knowledge on robot hardware.”

Kim and his colleagues have tested their robot design, motion planner, and landing controller in realistic simulations. Their findings are highly promising, as they show that the MIT humanoid robot should be able to perform a variety of acrobatic behaviors, including back flips, front flips and spinning jumps.

In the future, the MIT humanoid robot could prove to be highly efficient for completing a wide range of complex missions. Meanwhile, the researchers plan to test their design, motion planner and control algorithm in real world scenarios.

“We will now test the developed control algorithm in the real robot and keep pushing forward the dynamic capability of legged robots,” Kim said. “We also plan to incorporate a perception system into our control algorithm, to make robots be more capable to response to the change of external environment.”

Citation:
The MIT humanoid robot: A dynamic robotic that can perform acrobatic behaviors (2021, May 24)
retrieved 5 June 2021
from https://techxplore.com/news/2021-05-mit-humanoid-robot-dynamic-robotic.html

Denial of responsibility! TechNewsBoy.com is an automatic aggregator around the global media. All the content are available free on Internet. We have just arranged it in one platform for educational purpose only. In each content, the hyperlink to the primary source is specified. All trademarks belong to their rightful owners, all materials to their authors. If you are the owner of the content and do not want us to publish your materials on our website, please contact us by email – [email protected]. The content will be deleted within 24 hours.
acrobaticbehaviorsdynamicgadget updatehumanoidMITperformRobot
Share FacebookTwitterGoogle+ReddItWhatsAppPinterestEmail