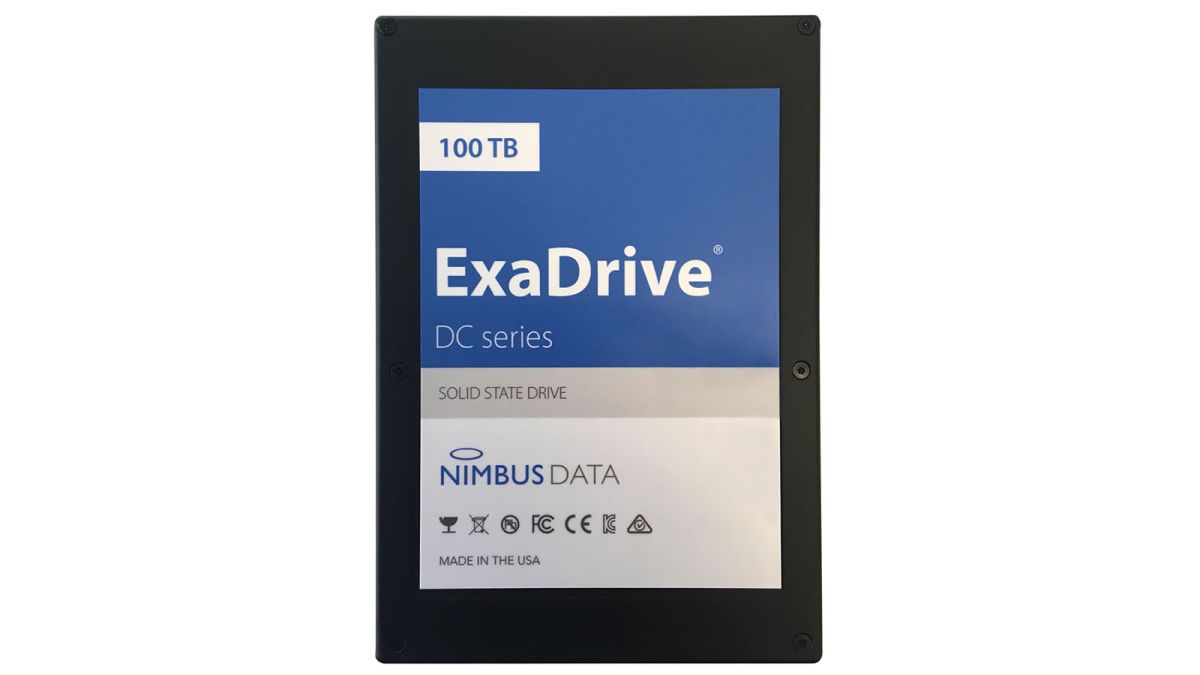 The world’s largest SSD just turned four and its 100TB capacity remains unmatched – but why?

When Nimbus Data launched the 100TB ExaDrive DC on March 19, 2018, it was by far the largest solid state drive ever launched, noticeably larger than your average SSD as it used a 3.5-inch form factor rather than the usual 2.5-inch laptop hard disk drives fit into. Since then, no one has even come close to challenging its hegemony, but why is that?

Part of the answer can be found in an interview TechRadar Pro did two years ago with the CEO of Nimbus Data, Thomas Isakovich. Firstly, Nimbus Data has a patent pending on the scale-out architecture of an SSD that gives the company a fundamental advantage that will be tough for other vendors to work around.

Then there’s the size of the market. Extra-large SSD capacities appeal only to a tiny fraction of the overall addressable solid state storage market. The big vendors are chasing flash sales volume, typically found in mobile phones, notebooks, and tablets, as well as boot drives for servers – and increasingly, cars.

Covid-19 and the supply chain disaster

The past two years have seen disruption of supply chains around the world as the Covid-19 chasm descended on the whole world. Pent-up demand for silicon chips meant that whatever capacity was available was rapidly snapped up, an ongoing problem which will only get worse because of the ongoing war in Ukraine.

Not only does such turmoil drive prices up, whatever capacity is available is often secured for existing, bigger partners. In the case of niche products, this can mean longer lead times (months, if not a whole year) as well as significant increase in price, and development times also get longer.

After all, if customers are happy to pay extra even for older technology, where’s the incentive to deliver better/cheaper products? That helps explain why, even 18 months after its initial launch, the Nvidia GeForce RTX 3090 is still so expensive and remains an elusive buy. Customers are happy to stick with it for now and pay a premium.

Similarly, during our interview in 2020, Nimbus Data’s CEO hinted at a 200TB SSD in 2021, but still failed to appear (We have reached out to him for updates and will report back as soon as we get an answer). It could be that the target market is happy with a 100TB drive and doesn’t need anything larger for now. 20TB hard drives, great for data center usage, are now common and are still an order of magnitude cheaper than the Exadrive DC.

The fact that Nimbus Data released lower capacity (and cheaper) SSDs based on QLC (the ExaDrive NL series) indicates that the company wants a higher market penetration through cheaper products. The 100TB SSD was a trailblazer, a halo product, so following that up with something more mainstream is the next challenge.

What’s next for humongously big SSDs then?

Since the launch of the DC100, NGD Systems and Scaleflux are the only companies that have produced SSDs with a 50TB capacity or more. None of the big players (Seagate and Western Digital) have dipped their toes in that niche.

Penta-level Cell (PLC) is the next big thing, allowing a quarter more per-cell capacity over QLC, but also resulting in slower performance and lower endurance. That will enable niche players like Nimbus Data to pack even more bits per unit volume and perhaps even reach the holy grail of 1PB per drive.

For now, you’d still need to fork out $400 per TB – which is a 4X premium compared to the average per Terabyte price of a high capacity SSD (like the Samsung 870 QVO) – for that 100TB ExaDrive drive.

Denial of responsibility! TechNewsBoy.com is an automatic aggregator around the global media. All the content are available free on Internet. We have just arranged it in one platform for educational purpose only. In each content, the hyperlink to the primary source is specified. All trademarks belong to their rightful owners, all materials to their authors. If you are the owner of the content and do not want us to publish your materials on our website, please contact us by email – [email protected]. The content will be deleted within 24 hours.
100TBcapacitygadget updatelargestremainsSSDtech boytech news
Share FacebookTwitterGoogle+ReddItWhatsAppPinterestEmail