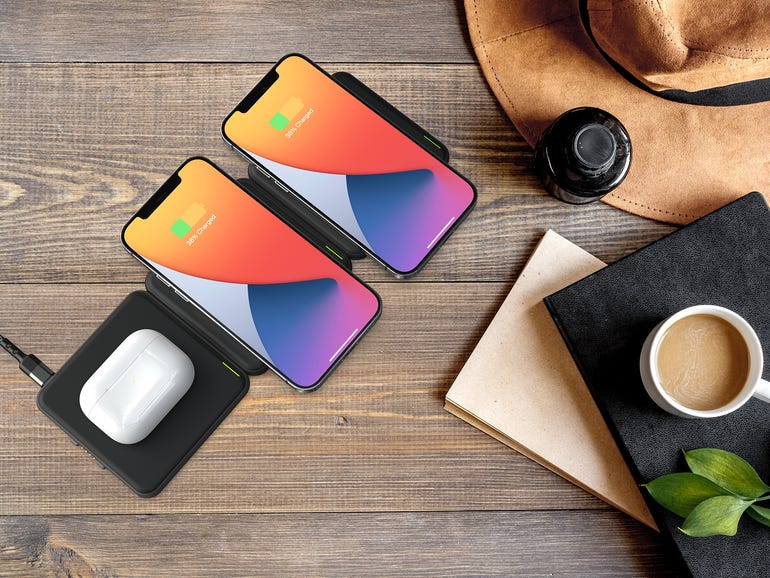 Regardless of the laptop or smartphone you use, at the end of the day (often literally), it needs to be charged. Once, the simple plug or power brick was little beyond a utilitarian appendage. However, the proliferation of alternative charging methods, such as USB-C’s PD standard and Qi, have unleashed a host of creative options, particularly when more than one needs the juice.

The USB Power Delivery standard is well on its way to becoming a nearly universal charging option. Today, it can power devices requiring 100 watts — and it’s preparing to handle much more. But even with many chargers offering a combination of USB-C PD and USB-A connectors, few go the extra mile.

resembles other high-end multi-connector chargers, ones with two or three USB-C PD connectors supporting Version 3 of the Power Delivery standard and an 18-watt US-A port. Its side, though, includes a two-prong AC outlet to allow the piggybacking of other HyperJuice modules.

Hyper claims that up to 16 chargers can be chained together to deliver up to 1600 watts of power among the connected devices. While such a Jenga tower would certainly need to be stabilized on a floor or table, the more common scenario of joining two or three connectors would work well from a power strip.

Another spin on the AC-enabled charger comes from Baseus, which makes a full line of GaN accessories helpfully marked with their wattage in large print on their sides. The company offers a
65-watt GaN charger

with two AC outlets, two 65-watt USB-C PD ports, and two USB 3.0 connectors to charge a total of six devices (including two that may not support USB charging).

And while USB-C has become standard in almost all new laptops, it can create dongle headaches for notebooks that have only one or two USB-C connectors as their only means of wired data exchange. Hence, USB-C hubs have become must-have accessories for many users.

For those who’d rather avoid carrying a second device, Lauco has integrated a basic USB-C hub into a 115-watt charger. In addition to supporting USB-C data transfers, the product includes an HDMI port for adding a second monitor that may not support video over USB-C.  The product is available for preorder on Kickstarter.

The inductive charging method won a hard-fought battle for market dominance, beating back competitive standards and ultimately winning Apple’s support for iPhones — despite some early executive naysaying. Apple, though, has never seemed completely comfortable with the standard, trying to overcome its limits with the cancelled AirPower charging pad and by tweaking the standard on the Apple Watch to make it only work with Apple-certified chargers.

But that hasn’t stopped others from creating new ways to top off smartphones and other devices with the standard. Two products, for example, address the rightsizing dilemma of Qi charging pads with modules that let you add, subtract, or swap according to your needs. The
BaseLynx system

offers four kinds of modules, including your
standard Qi pad

. But the most surprising one is the
Vert Charging Station

, which lets you slide in devices vertically for USB-based charging. It includes two 18-watt USB-C PD connectors and two 12-watt USB-A connectors. Such specs imply that that the Vert module is designed for, at most, tablets, but Scosche says that it can accommodate a laptop or even a Nintendo Switch. Each module has a “point score” associated with its usage; BaseLynx can accommodate up to 15 “points” worth of modules.

, which offers only
coaster-like Qi

charging pods that attach magnetically. Up to seven modules can be attached, although you’ll need to step up from its standard 30-watt to a 65-watt charger to handle that many.

Finally, for those looking to reduce the desk clutter associated with a charging pad, the Function 101
BentoStack Charge 8000

can wirelessly charge only a single device at a time but can do so atop a small box that’s sized just right for such popular accessories as Apple Watch bands, an AC adapter, or an Apple Pencil. As a bonus, the charging pad includes an 8,000 mAh battery to help keep phones topped off even when away from any outlet. It can also be used to charge devices via a USB-C or USB-A connector.

Denial of responsibility! TechNewsBoy.com is an automatic aggregator around the global media. All the content are available free on Internet. We have just arranged it in one platform for educational purpose only. In each content, the hyperlink to the primary source is specified. All trademarks belong to their rightful owners, all materials to their authors. If you are the owner of the content and do not want us to publish your materials on our website, please contact us by email – [email protected]. The content will be deleted within 24 hours.
accessoriesdevicecharginggadget updatemultiplyoptionstech boytech newstech news boy
Share FacebookTwitterGoogle+ReddItWhatsAppPinterestEmail

What Does It Mean to ‘Yassify’ Anything?