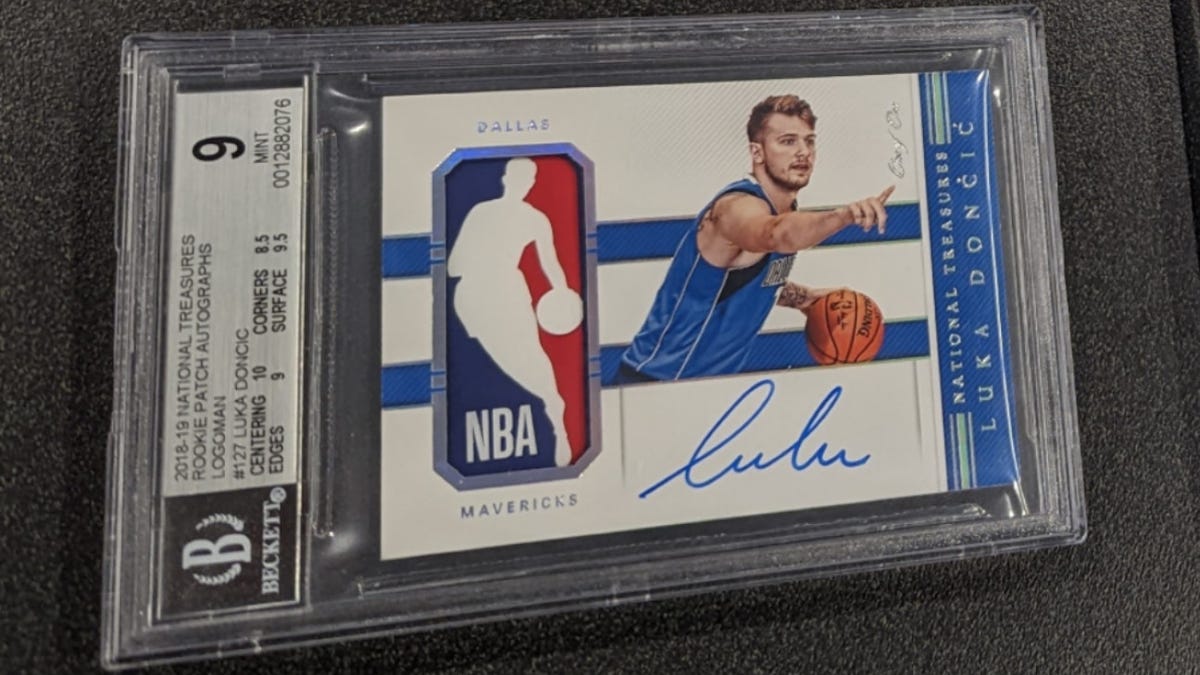 Trading cards are big business, and they’re going high-tech too

You might remember trading cards had their heyday in the 80s and 90s, when the hobby – like everything else – was more analog. It wasn’t the most efficient or reliable market, but millions of people, young and old, valued trading cards enough to consider them an investment.

But for the last few years, enthusiasm for investing in trading cards has been going through something of a resurgence. And it’s a lot more high-tech than keeping your best cards in an old shoebox, too.

While digital collectibles in the form of NFTs burst onto the scene and then melted away again (for now, at least), trading cards continue to generate interest — just take note of YouTube celebrity Logan Paul wearing an ultra-rare card in the ring, or Derek Jeter opening his own trading-card marketplace.

And it’s big business, too: the sports trading-card market is expected to grow by another $6.7 billion by 2026.

Why are trading cards suddenly such a big deal again? Part of the answer is, simply, that people like them.

“It’s still sports, it’s still Americana,” says Jesse Craig, VP of sales for PWCC Marketplace, a platform for buying and selling trading cards and other collectibles. “And if you can combine investing with collecting and something you love, we believe that the majority of Americans would much rather do that than dump money in the stock market.”

The trading cards market also made a resurgence in part because of the COVID-19 pandemic, Craig reasons.

“It allowed people to be at home, and that sparked some nostalgia,” he says. “People had more time on their hands, or were working from home, and they may have been digging into their closet, finding collections.”

That spark of nostalgia coincided with the emergence of technologies that have made it easier than ever to buy and sell collectibles. PWCC runs regular auctions and a fixed-price marketplace on Amazon Web Services, claiming it hosts the largest trading-card marketplace in the world.

The business, however, is more than just a bespoke version of eBay. Along with providing a platform for buying and selling cards and other collectibles, PWCC acts as a physical clearing house through which all assets move. Its Tigard, Oregon facility is equipped with custom-built robots, sophisticated camera setups, and a bank-quality vault – constructed of 750,000 pounds of concrete – to ensure the swift and secure tracking of assets.

To get their collectibles on the PWCC platform, a seller first has to mail their assets to PWCC, where items are tracked with cameras from the moment they’re opened in the mailroom. Each submission is tagged with a QR code and is linked to a submission number, the client’s account number, and other basic information. PWCC receives thousands of cards each day. To process all of the cards and input the information onto its platform, the cards move through one of two custom-built machines.

With a robotic arm, the machine picks up each card, takes a picture of it and flips it over to take a picture of the other side. High-resolution and low-res images are linked to the appropriate submission numbers, and the submission is logged in the client’s account. Using optical character recognition, the machine can recognize what type of card it is and give it an appropriate label for the auction site. With machine learning, the system gets better at labeling cards with each submission. The whole process takes about six seconds per card.

If the card or collectible is going to be auctioned off in one of PWCC’s monthly premier auctions, it moves to PWCC’s 360-imaging station. Using three cameras, the system takes 36 images of the card as it spins 360 degrees. PWCC has dialed down the process from about five minutes per card to just 30 seconds.

“With sports cards, condition really matters,” explains Jared Hippler, PWCC’s asset control manager. On PWCC’s auction site, he says, “you’re able to see every angle of the card at three different heights, and these are all very high definition images. You can actually zoom in and see every little detail.”

From there, the cards go through an appraisal process, which is key for PWCC’s Capital Lending Program. The company provides loans and cash advances to clients, using trading cards as collateral. PWCC recently secured $175 million to expand its lending, in a deal led by Whitehawk Capital Partners, LP – the first institutional banking deal of its kind. The company was able to secure the debt facility because it demonstrated how – using the vast datasets on transactions and sales histories it has accumulated – it can accurately predict the value of a card at auction.

“Data is really at the core of a lot of what we do,” Craig says.

Finally, the trading cards go to the vault – a 2,000-square-foot space surrounded by 11 inches of concrete on all six sides. To get in, you have to swing open one of two 7,500-pound doors. There are 140 security cameras keeping careful watch of everything in the vault, as well as motion detection sensors and security personnel during business hours. The temperature, humidity and lighting are all carefully controlled in the vault to preserve the archived items. Only select PWCC employees are allowed in the vault, but anyone using the vault can view high-quality photos of their assets online.

The vault is the heart of the PWCC ecosystem – the physical structure that has enabled PWCC to create a trading-card platform for the digital era. With all of the physical assets in one place, PWCC can offer a reliable, fast-moving trading platform, as well as modern financial services that leverage the value of customers’ holdings.

“Digital archival of assets and creating liquidity for our clients – it all really circulates around the vault,” Craig says.

PWCC encourages traders to use the vault by making its storage services free for any trading card valued over $250 or any assets purchased through PWCC. All other items are charged a nominal one-time fee.

Even though trading is an old-school hobby, most of PWCC’s customers have embraced the digital approach – in fact, about 80% of the assets in the PWCC vault never leave. People buy and sell cards on the digital platform, while they physically sit safely in the vault.

“For those long-term collectors that like to hold their items on a daily basis, the vault is not for them,” Craig acknowledges. “But there are a ton of people that collect [who] don’t look at their items every day or every week, or even every month, and [those items] go sit in a closet or a safety deposit box, or whatever it may be… The beauty of the vault is you can have it there, it’s digitally archived, safely stored and fully insured… and you can enjoy them from anywhere in the world by logging into your PWCC account.”

On the face of it, a trading card you never hold yourself is “not very different” from an NFT, Craig says. Arguably, PWCC has been making its own version of NFTs since 2019, when it started offering digital archival services – albeit, an NFT that’s not connected to blockchain.

“It’s a digital representation, but it’s backed by a physical asset,” Craig qualifies.

While there are certainly corollaries between the trading card and NFT markets, Craig says trading cards are less volatile because of the emotional connection people have to their cards.

“It’s the last thing they want to get rid of,” he says. “Usually, during periods of inflation, people need cash, they dump and they sell [their investments]. We see less of that in our space than you would in traditional markets because of that emotional attachment people have to them.”

Craig cites data to back up this claim. For instance, when the S&P 500 dropped more than 50% from its peak during the subprime mortgage crisis of 2008, trading cards only fell about 10%.

PWCC, in fact, has created various market indices, showcased on its website, to illustrate the impressive investment performance of professionally graded trading cards as compared to the S&P 500.

The company is expanding further into other collectibles, adding room in its archives for comic books, video games, and other memorabilia (think a pair of shoes signed by Michael Jordan or a jersey worn by Lebron James). The company recently secured a new 51,000 square-foot facility to expand its operations, with plans to build a collectibles museum for visitors.

“I think the younger generation, they want to put their money into things that they understand,” Craig says. “You know, they’re still making Marvel movies, so comics are super relevant. The history of coins is really cool and unique. Almost everybody has played video games at some point in their life, right? The connection that people have with these assets is, I think, really the driver of our business.”

Denial of responsibility! TechNewsBoy.com is an automatic aggregator around the global media. All the content are available free on Internet. We have just arranged it in one platform for educational purpose only. In each content, the hyperlink to the primary source is specified. All trademarks belong to their rightful owners, all materials to their authors. If you are the owner of the content and do not want us to publish your materials on our website, please contact us by email – [email protected]. The content will be deleted within 24 hours.
Bigbusinesscardsgadget updatehightechtech boytech newstech news boy
0
Share FacebookTwitterGoogle+ReddItWhatsAppPinterestEmail

Twitter 2.0: CEO Musk reveals features of ‘Everything App’; will have…

Xiaomi 13 Pro appears on Geekbench, may come with Snapdragon 8 Gen 2…

Cyber Monday speaker deal: JBL Flip 6 is $40 off after Black…