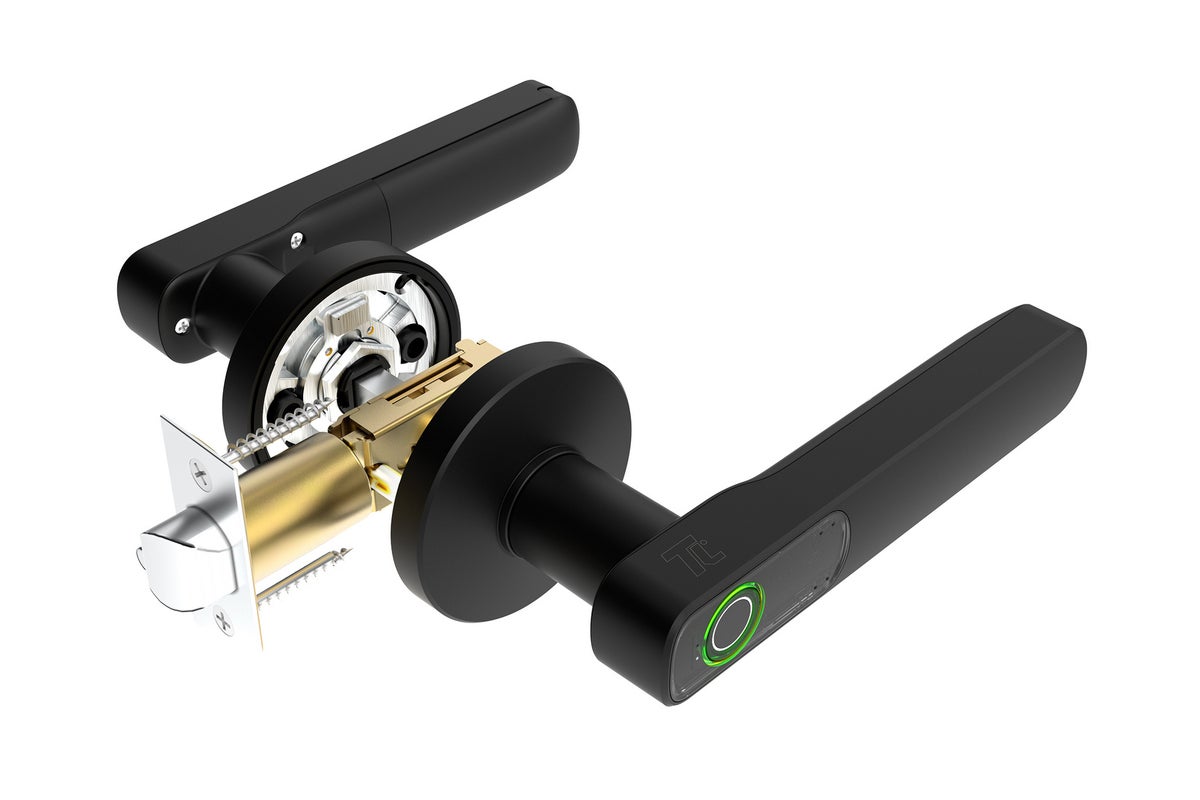 Turbolock’s latest smart lock lacks Wi-Fi, using only Bluetooth for its wireless connectivity. For Turbolock, that’s not a fault, it’s a feature: Because this is a so-called “Non-Wi-Fi-enabled (NWE)” smart lock, it can’t be hacked via the internet, per the company. (There’s also no physical keyhole, so the lock can’t be picked, either.)

Unlike most smart locks on the market, the TL88 isn’t a deadbolt but rather a lever lock with a standard latch assembly. All the smarts are built into electronics jammed directly into the handles.

This review is part of TechHive’s coverage of the best smart locks, where you’ll find reviews of the competition’s offerings, plus a buyer’s guide to the features you should consider when shopping for this type of product.

While it streamlines the design, it does make for a mildly challenging physical installation. The TL88 comprises just three main parts (inside lever, outside lever, and internal latch), with no plates or escutcheons to contend with, and the whole affair is held together with just two bolts (plus the two screws needed to connect the latch to the door).

Making this connection is a bit tricky though, in part because one of the bolts is placed behind the door handle. You can pull the handle down to access this bolt, but this puts a lot of strain on the mechanism and makes the bolts, which are already difficult to turn, even more resistant. After I eventually got everything connected, the bolt heads (which are not covered in the final assembly) were partially stripped and far from aesthetically appealing.

Four AAA batteries (not included) power the system, which Turbolock says will last up to 12 months. Unfortunately, another challenge is that the batteries are stored awkwardly inside the interior handle, beneath a cover on the handle’s back side which is secured by two minuscule screws, one of which I immediately lost the moment I took the cover off the first time. Getting the batteries in place without falling out while the handle is attached to the door is incredibly difficult, so bring your patience with you. (A micro-USB port is built into the exterior handle if you need to provide emergency power should the batteries die.)

Once the hardware is in place, it’s time to install the Turbolock app and set up the lock. This is the easier part of the process, though note that the manual I received doesn’t jibe with the app, probably because it was written for an older version. Since it’s a Bluetooth-only lock, registration is straightforward: The app found my test lock immediately and things were ready to go in a matter of seconds—although it turned out the lock needed a factory reset before it would accept any commands. At least this is quickly and easily done within the app.

You have just two options for gaining entry through a Turbolock-equipped door: Use the app, or use your fingerprint. For the former, you’re just a quick tap away from gaining entry, and access (either permanent or time-limited) can be shared with other users by creating a user account for them that’s tied to their phone number. I’m happy to report that Turbolock’s fingerprint scanner is also a top-shelf technology, though it only supports the storage of 20 fingerprints total.

Fingerprints can be enrolled within the app quickly and seamlessly, with just three sample scans of a fingertip required. Oddly, all fingerprints are time-limited, but there’s no restriction on how far out that restriction can be: The system supports expiration dates as far away as 2098, which seems like plenty of time. I had about an 85-percent success rate in getting Turbolock to recognize my fingerprints, and only rarely did it require more than two attempts to scan my digits.

Successfully unlocking the door via app or fingerprint allows the latch to be turned once and once only. Once the handle is turned and released, the door relocks immediately within a second or two. There’s no way to change this behavior, and Turbolock users will need to get used to the idea that this is a door that is essentially always locked unless you manually put the lock into a temporary “passage mode” via the app. Otherwise, there’s no way to change any of Turbolock’s settings—such as whether to disable the light on the fingerprint scanner or turn off its audible beeps. The only options in the settings menu are to rename the lock, upgrade its firmware, or factory reset it.

Available in your choice of brushed nickel or matte black, either one for just $90, the Turbolock TL88 is a decidedly affordable option for a unit with a fingerprint scanner. If you don’t mind the lack of Wi-Fi (or a deadbolt), and its limited configurability options don’t disturb you, it’s a decidedly reasonable option to put on your list of considerations.

Denial of responsibility! TechNewsBoy.com is an automatic aggregator around the global media. All the content are available free on Internet. We have just arranged it in one platform for educational purpose only. In each content, the hyperlink to the primary source is specified. All trademarks belong to their rightful owners, all materials to their authors. If you are the owner of the content and do not want us to publish your materials on our website, please contact us by email – [email protected]. The content will be deleted within 24 hours.
basicBluetoothfingerprintgadget updatelockReviewtech boytech news
Share FacebookTwitterGoogle+ReddItWhatsAppPinterestEmail

Gartner: How to turn old datacentres into critical IT assets