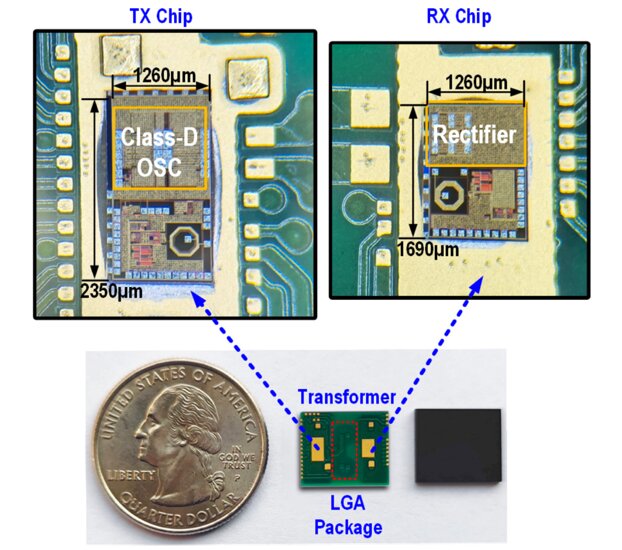 The research team led by Prof. Cheng Lin from the School of Microelectronics, University of Science and Technology of China (USTC) of the Chinese Academy of Sciences (CAS), has developed two power management integrated circuits with low electromagnetic interference (EMI) and fast transient responses. Both circuits were presented at the IEEE International Solid-State Circuits Conference (ISSCC), the top conference in integrated circuit design.

The frequency of the internal power oscillation signal and the power density of circuits become higher as the size of the isolated power is made to be smaller. Isolated DC-DC converters tend to act as sources of radiation, which would raise EMI issues. Conventional isolated DC-DC converters reduce EMI by modifying internal layers, which would incur high expense and always fail to eliminate EMI at its origin. Therefore, it is an urgent need to develop a low-cost circuit capable of reducing EMI at the source.

In this work, researchers provided a symmetrical transmitter topology of Class-D oscillator, which can reduce the common-mode (CM) current of the isolated power system, to lower EMI radiation. Besides, dead-time control was applied in this study to avoid the shoot-through current effectively. In addition, by reducing the voltage stress of the power transistor, the conversion efficiency of the oscillation was effectively improved, thereby decreasing the cost of the circuit.

Efficiency measurement results showed that the circuit achieved a peak efficiency of 51% and a maximum output power of 1.2W, and its EMI performance passed the CISPR 32 standard.

In this study, based on the topology of a dual-phase series capacitor DC-DC convertor, a voltage-mode PWM controller with two feedback loops was proposed to realize the modulation of the output voltage and the series capacitor voltage. Researchers also proposed a fast transient response technology, which not only overcame the shortcomings of the traditional PWM control in terms of loop response speed and load transition time, but also used dual-phase inductor current to simultaneously charge the load to further improve the response speed of the converter.

Provided by
University of Science and Technology of China

Denial of responsibility! TechNewsBoy.com is an automatic aggregator around the global media. All the content are available free on Internet. We have just arranged it in one platform for educational purpose only. In each content, the hyperlink to the primary source is specified. All trademarks belong to their rightful owners, all materials to their authors. If you are the owner of the content and do not want us to publish your materials on our website, please contact us by email – [email protected]. The content will be deleted within 24 hours.
advancedcircuitsgadget updateintegratedmanagementpowertech boytech news
Share FacebookTwitterGoogle+ReddItWhatsAppPinterestEmail

GitHub is getting better at hunting down your dangerous code