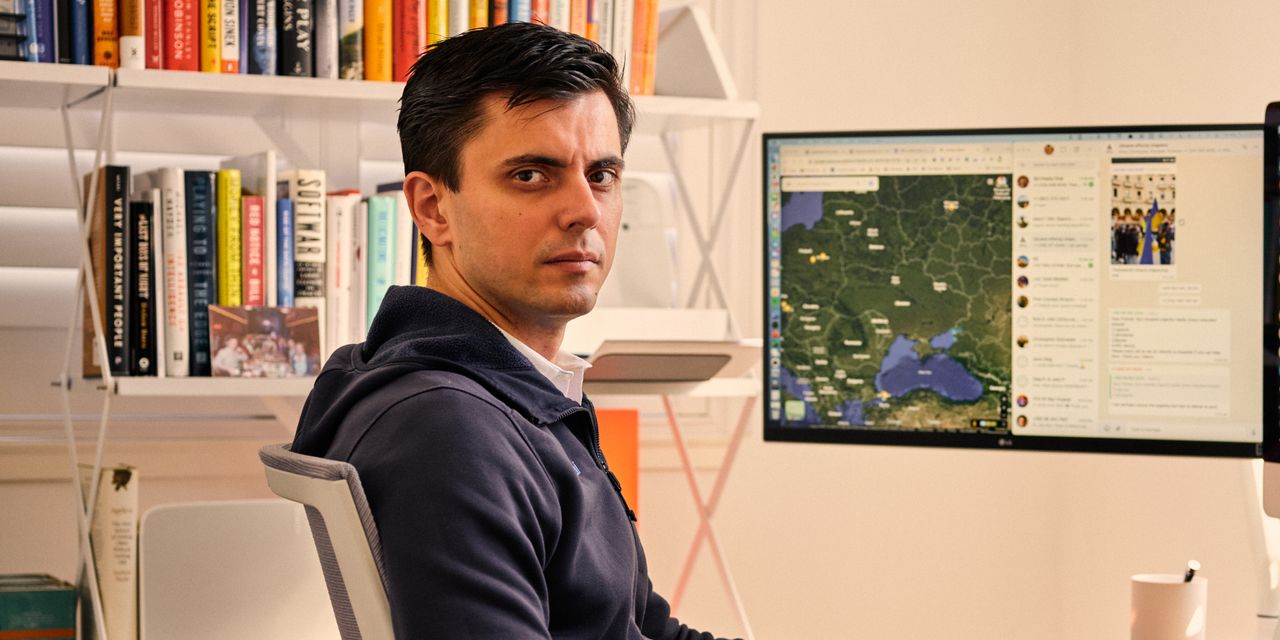 stood at Romania’s border with Ukraine, waiting for his mother and families of employees of his technology company, which just weeks earlier had been based in Kyiv.

In all, nine people made it, and Mr. Kolomyeytsev drove them that night in early March into Hungary. This task of moving people across borders—finding them rides, shelter and food—still occupies him, more than a month after he started shuttling his employees and data servers out of Ukraine and into Poland in anticipation of a Russian invasion.

“We understood that we are pretty much on our own to save the business and to save our people and save human lives,” said Mr. Kolomyeytsev, the 44-year-old chief executive officer of StarWind Software Inc., a data-storage company.

In an escalating war, business leaders responsible for large Ukrainian workforces have become evacuation coordinators, military strategists, providers of humanitarian aid and, in some cases, financiers of the Ukrainian army. Startups like StarWind are using their tech savvy, dispersed workforces and relative agility as smaller and privately held companies to help mitigate the business trauma and human catastrophe of war.

For the CEOs running these startups and their deputies, the normal tasks of shipping code and ramping up sales have been replaced with mapping escape routes and paying colleagues fighting with the army.

Their preparations for the war started months ago. The startups secured passports and Covid-19 vaccines for employees and their families, converted money into U.S. dollars and transferred staff to safer locales. Now, from perches in Poland, Germany, Israel, Silicon Valley and elsewhere, these startup leaders continue to run their businesses while adding another task—helping to defend Ukraine.

StarWind doubled the salaries of employees who enlisted in the Ukrainian army, Mr. Kolomyeytsev said.

Ukrainian startup Lemon.io, an online marketplace for software engineers to find jobs, is giving all of the company’s profits to the army at the end of each month—around $124,000 so far—and donating to organizations purchasing drones for the army, said CEO

When employees at software company People.ai Inc. decided to enlist, their co-workers raised more than $30,000 to buy the army sleeping bags and mats, ham radios and other communications hardware, said CEO

a Ukrainian native who has lived in Silicon Valley for almost a decade.

These startup leaders and their workers say such efforts ease the helplessness of watching the destruction of their home from afar.

“Our plan is winning this war and doing whatever we can to help the war effort, and make sure that our country can return to a peaceful life,” said

director of business development for StarWind.

Mr. Volodarsky of Lemon.io is one of around 10 people from his company that made it out of Ukraine; he fled to Jerusalem with his wife and two children, ages 6 and 3 years old. To escape, they broke curfew and drove out of Kyiv in the early morning to the border with Hungary, where they crossed on foot and then flew to Israel. He said he talks daily with the 33 employees in Ukraine, three in Russian-occupied cities, offering to help them relocate.

They feel it is too late, Mr. Volodarsky said. Men fit for military service aren’t allowed out of the country, others have deemed the journey too risky.

“People are just too scared to go into the street to leave,” said Mr. Volodarsky, age 35.

Mr. Volodarsky said he had a plan for the war. He paid out two months of salaries in advance to his employees and increased payments to the freelancers who use Lemon.io to find work, in case banks went offline. He told his employees, if war starts, grab your emergency bag and first-aid kit and meet at his co-founder’s house in western Ukraine.

“We will support you unless you decide to move to Russia,” Mr. Volodarsky wrote to his employees before the invasion.

Things didn’t go as planned, and workers remained put, some retreating to bomb shelters. “The feeling of guilt is stuck in my throat,” Mr. Volodarsky said.

Mr. Volodarsky said he has dismissed the company’s goals for the year; his objective now is to have enough money to pay his employees and help fund the Ukrainian army, and “just live through this.”

Lemon.io, People.ai and StarWind say their businesses continue to operate, helped in part by early preparations and being accustomed to operating with a globally dispersed workforce.

StarWind is based in Massachusetts but was founded by Ukrainians, and three-quarters of its staff was based in Kyiv. It moved some data servers out of the country in personal cars; the rest of its data was transferred to other servers that the company bought or rented.

People.ai, a Silicon Valley-based company that uses artificial intelligence to help companies improve sales and operations, transferred some work that was typically done in Ukraine to San Francisco and Toronto.

Mr. Rogynskyy of People.ai created a task force and in mid-December began holding secret meetings to game out dozens of scenarios of a Russia invasion, with help from a former U.S. Army platoon leader, who had joined as Mr. Rogynskyy’s chief of staff. Close to a third of his engineering team is in Ukraine.

A month later, Mr. Rogynskyy gave his team in Kyiv instructions: Make sure you and everyone in your family has a passport, convert your money into U.S. dollars and leave Ukraine. The company sent employees screenshots of directions from Google Maps showing the best routes out of the country to a safe meeting point, and hotels along the way.

“They thought that I’m crazy,” said Mr. Rogynskyy, 36 years old, who grew up in Dnipro, which has been hammered by Russian attacks.

Most People.ai employees were out of Ukraine by mid-February. The company paid for passports for employees and immediate families, transportation, cellphones and housing.

Mr. Kolomyeytsev, of StarWind, said he has anticipated a Russian invasion since the annexation of Crimea in 2014. In recent years, he and some employees had practiced shooting most Thursdays—their version of team building, he said. He estimates seven employees have joined the Ukrainian army.

Mr. Kolomyeytsev dispatched Mr. Tuzov, StarWind’s head of business development, to Wroclaw, in southwest Poland, to open a new office. Normally, Mr. Tuzov’s job involves working with StarWind’s partners and customers, which include big retailers and the U.S. Army. But for more than a month, the 29-year-old has been shuttling his colleagues and their families who arrive at the Polish border to a hostel he prepared.

Among the recent arrivals is

a StarWind customer-support employee, who made a 33-hour trek to Wroclaw from western Ukraine, where she left behind her parents and younger sister.

“I really didn’t expect that the company would care for me when I am so young,” said Ms. Havrada, 18, who joined StarWind in January.

About 60 of StarWind’s approximately 180 Kyiv-based workers have relocated to Wroclaw. “It’s a little bit of a survivors’ complex as well because we are here,” Mr. Tuzov said.

What does the future hold for Ukrainian startups? Join the conversation below.

head of human resources for People.ai’s Ukraine operations, is now tasked with helping co-workers establish themselves in a new city. This includes, among other things, securing legal residency and work permits, and enrolling children in school.

On the weekends, she and her colleagues go to local pharmacies and buy first-aid supplies to send to Ukraine, Ms. Lutska said. Many join pro-Ukrainian demonstrations.

But the 31-year-old wonders if she and her husband will ever live in the new house in Kyiv they had nearly finished building when the war began.

“We don’t know if we will be able to return back,” said Ms. Lutska, or “if Ukraine will be free or not.”

Denial of responsibility! TechNewsBoy.com is an automatic aggregator around the global media. All the content are available free on Internet. We have just arranged it in one platform for educational purpose only. In each content, the hyperlink to the primary source is specified. All trademarks belong to their rightful owners, all materials to their authors. If you are the owner of the content and do not want us to publish your materials on our website, please contact us by email – [email protected]. The content will be deleted within 24 hours.
aerospaceAerospace/DefenseArmed ForcescodeComputer HardwarecomputersComputers/Consumer ElectronicsComputing
Share FacebookTwitterGoogle+ReddItWhatsAppPinterestEmail

I ditched consumer Wi-Fi routers and switched to Ubiquiti

Super Punch-Out!! has a hidden two-player mode — and you can try it on…