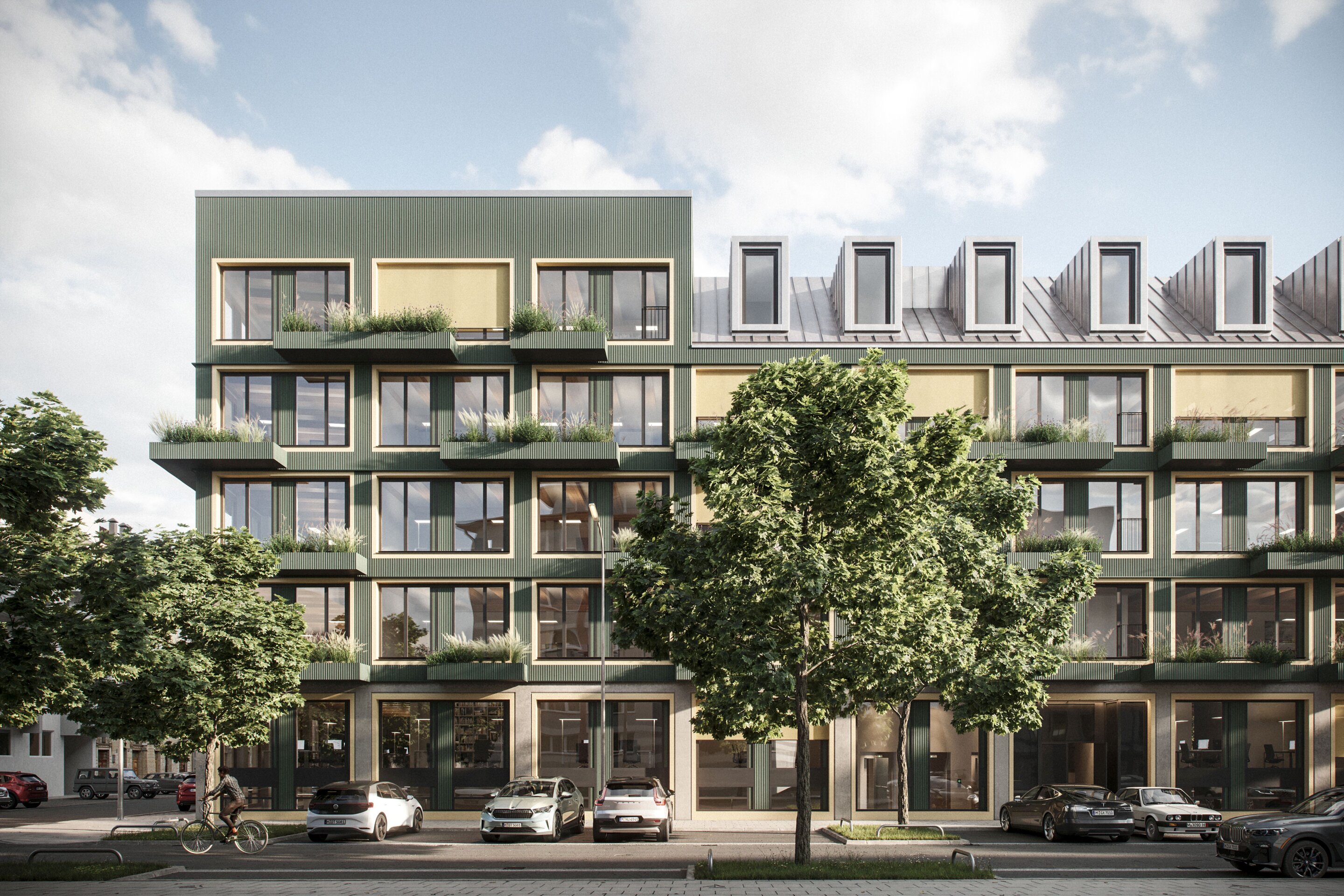 Wood as a building material has deep roots in the cultural memory of many regions. A study by Karlsruhe Institute of Technology (KIT) now shows how much future building with wood opens up. Considering the cultural, technical, and design aspects of building with wood, the study examines how timber construction can make a comeback in cities. Its proposition is that more color is the key to greater acceptance. The reference project for the study is “Vinzent,” a residential and office building with colorful, planted wooden façades in Munich’s Neuhausen district.

The study, “Farbige Holzfassaden im urbanen Kontext” (Colored Wooden Façades in Urban Contexts), was produced by KIT’s Institute for Building Design and Technology and commissioned and financed by the Munich-based project developer Bauwerk. Among other things, it identifies three megatrends driving the new boom in timber construction: ecology and environment, mechanization and digitalization, and new housing. For the first of these, wood stands out as a natural material with its favorable carbon and energy footprints, recyclability, low emissions, and relatively good availability. In mechanization and digitalization, timber construction is seeing major advances such as the combination of the drafting (CAD) and production (CNC) processes and new surface finishing methods.

For the third megatrend, wood is proving itself superior to other building materials in that it can often be used to produce prefabricated modules that can be installed with corresponding efficiency in projects like the densification of existing neighborhoods. “Precisely because timber construction is becoming more and more prominent in current social discourse, it needs to reinvent itself in order to assume and maintain a new place, especially in cities,” says Professor Ludwig Wappner from KIT’s Institute for Building Design and Technology. “We believe it should do that based on the design potential of material authenticity, cutting-edge production techniques, and architectural continuity.”

Color pleases the eye and protects the wood

According to KIT’s architects and researchers, wood’s return to urban construction harks back to artisanal skills and aesthetic principles from pre-concrete and pre-steel times. However, this does not mean a renaissance of idyllic villages with half-timbered houses. Instead, the requirements of present-day urban planning are forming entirely new connections with the structural principles of timber construction. The study, which is directed at planners, builders, renovators and the interested public, focuses on wooden façades. The authors describe the transition from linear to planar structural elements and advocate plywood surfaces and laminated ceilings, structural rather than chemical wood protection, ecologically sound planting schemes—and more color.

“Color is timber construction’s admission ticket to urban architecture,” says Falk Schneemann, an architect at IEB and one of the three authors of the study with Wappner and Peter Hoffmann. “It inspires acceptance and facilitates the conceptual integration of wooden structures into established urban neighborhoods.” In addition, modern wood stains that pose no health hazards protect the wood against harmful environmental influences such as exhaust fumes, ultraviolet radiation, and fungi.

While Wappner contributed to the study, he also worked with the architectural office allmannwappner on the design of the Vinzent wood hybrid building in a 19th-century and postwar neighborhood in the Neuhausen district of Munich. On its completion in 2024, this showcase city-center project developed by Bauwerk will house 56 apartments as well as offices. The building’s appearance is characterized by its colored façade made of spruce along with numerous design details and an adjoining, self-sustaining plant system.

“We manage our company according to ESG principles and are strengthening our emphasis on them. That’s reflected more and more in our projects,” says Jürgen Schorn, Managing Partner at Bauwerk. “Vinzent is our first construction project with wood. This focus on sustainability makes it one of the most sought-after projects we’ve ever had. That shows that environmental awareness is a top priority for people, and a real inducement to buy.”

Denial of responsibility! TechNewsBoy.com is an automatic aggregator around the global media. All the content are available free on Internet. We have just arranged it in one platform for educational purpose only. In each content, the hyperlink to the primary source is specified. All trademarks belong to their rightful owners, all materials to their authors. If you are the owner of the content and do not want us to publish your materials on our website, please contact us by email – [email protected]. The content will be deleted within 24 hours.
acceptancecoloredConstructionfaçadesgadget updateincreasetech boytech news
Share FacebookTwitterGoogle+ReddItWhatsAppPinterestEmail