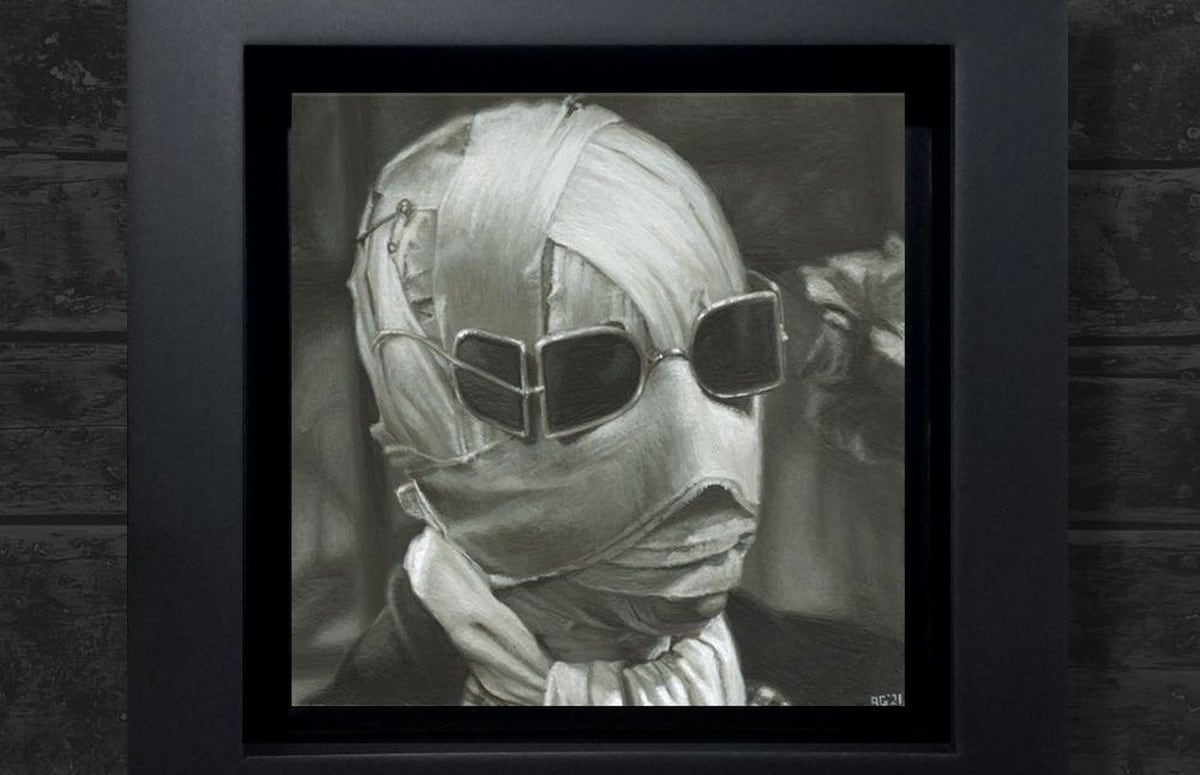 Ashton Gallagher, an Illinois-based artist, whose realism art includes painting life-like portraits of pop-culture characters, has received critical acclaim from all quarters. On June 4, he opened his third mini-portraits show at Gallery 1988 in Los Angeles and it was only a matter of hours before the paintings were sold out. The portrait of Imhotep, the Egyptian chancellor to the Pharaoh Djoser and the probable architect of Djoser’s step pyramid, was the only one in stock at the time of writing. The highlights of Ashton Gallagher’s ‘Mini Portraits III’ collection were surely the Universal Monsters — ‘The Creature from the Black Lagoon’ and ‘The Invisible Man’, and also Dracula, Frankenstein, and The Mummy.

Besides these, the collection included a painting of Professor Jones, the fictional character from the Indiana Jones franchise, and a portrait of Chadwick Boseman as ‘Jackie’, the character from the 2013 American biographical sports film, 42, about baseball player Jackie Robinson. Another famous painting was that of ‘Mr. Miyagi’, the fictional karate master from Okinawa, Japan, in The Karate Kid film series. However, all these portraits were marked “sold out” on the website.

Gallagher said that his mother is a Universal Monster fan and she talks about her personal connection as well as what it was like seeing them in theatres. “Any time I watch them, I try imagining what it would have been like to experience these movies in her shoes. In doing so it feels like a generational pop culture overlap,” he was quoted as saying by Gizmodo.

He said the creature from the Black Lagoon was the first painting he completed in ‘Mini-Portraits III’, which is the continuation of his previous show that included Dracula, Frankenstein, and the Bride of Frankenstein. “I started with Bride of Frankenstein — such an awesome character to paint. I had so much fun with the painting that in no time I had Frankenstein and Dracula alongside her. For plotting out 2021, I wanted to expand the set,” he said.

Last year, while talking of ‘Mini Portraits II’, the precursor to his latest work, Gallagher said that he always keeps a long list of characters that he wants to paint at the beginning, adding it’s basically whatever comes to the mind without any restriction of the genre. “Of that list, undoubtedly, there are a few that I immediately know, like Catwoman — yep, this one is happening just because I want to paint that character. So, I dive in from that point,” he had told the publication then.

He then explained that a lot of time ideas strike while he is in the middle of painting a piece. So, if the idea goes with the collection he is working on, he goes ahead or else saves it for another time, adding it to what he describes as the ever-growing list.

Denial of responsibility! TechNewsBoy.com is an automatic aggregator around the global media. All the content are available free on Internet. We have just arranged it in one platform for educational purpose only. In each content, the hyperlink to the primary source is specified. All trademarks belong to their rightful owners, all materials to their authors. If you are the owner of the content and do not want us to publish your materials on our website, please contact us by email – [email protected]. The content will be deleted within 24 hours.
Artistashton gallagher painting universal monsters dracula frankenstein the mummy pop culture us ashton gallagherblack lagoondraculafrankensteingadget updateLifeLikemini portraits 3
Share FacebookTwitterGoogle+ReddItWhatsAppPinterestEmail

What the Telecommunications (Security) Bill means for UK industry