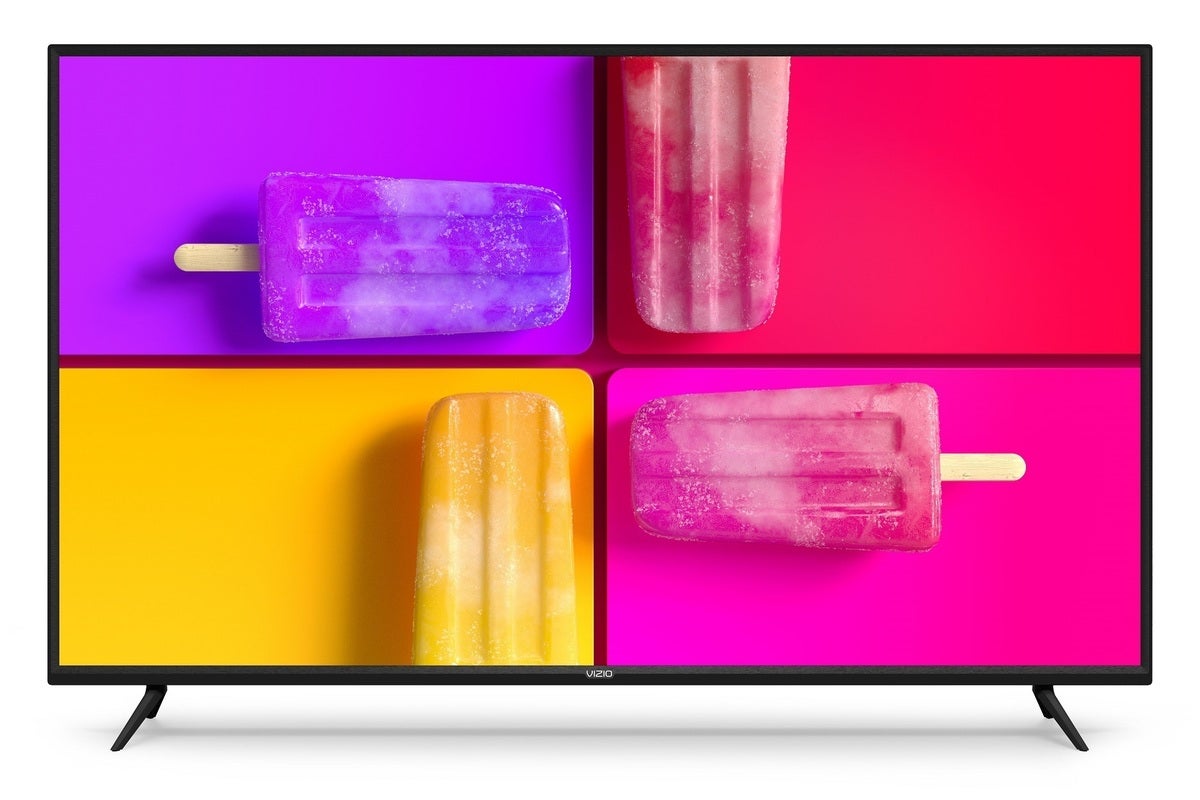 As with all its smart TVs, Vizio’s V-series brings the SmartCast interface to the table. It’s best in show when it comes to effectively melding entertainment content from disparate sources (over-the-air, streaming, etc.). It also synergizes nicely with the company’s minimalist remote, which now supports voice commands.

The V5-series specifically is also relatively affordable. The 55-inch-class, model V555-J evaluated here retails for just $500.  Alas, its image quality seems off compared to the V-series I reviewed earlier this year (that was the model V505-H19). This is largely due to screen uniformity—or the lack thereof.

This review is part of TechHive’s coverage of the best smart TVs, where you’ll find reviews of the competition’s offerings, plus a buyer’s guide to the features you should consider when shopping for this type of product.

TVs in the 2021 V-series are attractive devices with thin bezels wrapped around 60Hz, 10-bit, 4K UHD panels using old-school color technology and full array backlighting. In other words, there are no local dimming zones. The 55-inch V5-series model I tested weighed in at around 30 pounds and is approximately 3.5-inches at it’s thickest. It can hang on a wall with a 300 x 200mm VESA mount.

One area where the entire V-series shines is in its support of legacy outboard video equipment: You’ll find composite/component video inputs as well as RCA audio jacks (in and out). There are modern ports aplenty, of course, including digital optical (Toslink) out, coax for connecting an over-the-air antenna or a cable/satellite TV set-top box, and ethernet. Three HDMI ports are provided, with one actually supporting the newer audio standard, eARC. (The V505 only supported ARC. Click on this link for an explanation of the differences between ARC and eARC.) A single USB port is included for streaming from a mass storage device.

The V555-J supports all the major flavors of HDR, including Dolby Vision, HDR10, HLG, and even HDR10+. This generation also gets Bluetooth 5.0 support, while wireless networking remains at the Wi-Fi 4 level (dual-band 802.11n). Don’t fret, that’s more than sufficient for TV use.

The channel guide is the best feature of Vizio’s SmartCast user interface, which of course displays cable and over-the-air content, but also incorporates Vizio-curated content and all the most important streaming services.

The big players appear on the SmartCast home screen—Apple TV+, Netflix, Hulu, the Disney Channel, et al—and it takes very few clicks from there to switch inputs or navigate to the TV’s settings menu or anywhere else you wish to go.

The voice remote shown below is nicely minimalist and works well with the SmartCast interface. Functionality is intuitively split between the remote and the onscreen UI, putting it on par with the Roku OS interface and remote, and far more efficient than Samsung’s One Remote/SmartHub combo.

The V-series also handles DTS surround and Dolby Atmos audio, provides a low-latency game mode, and supports both Apple AirPlay 2 and Chromecast. Additionally, the TV is compliant with the Alexa, Google Assistant, and Siri digital assistants.

If I have any complaint (an exceedingly minor one) about SmartCast, it’s that the local media player doesn’t remember where you left off watching your movie as Roku does. On the other hand, while it’s a bit old-school in appearance (think DOS), it no longer crashes or takes forever to move to the next page. In short, I don’t dread it anymore, though it’s still not quite up to Roku’s player.

Having just reviewed the V505-H19 earlier this year (better late than never), I was disappointed in the image provided by this new version of the V5-series. Note that with the earlier review, I had just finished with the somewhat image-challenged Konka U5. The V555-J treads on the heels of a Sony OLED and the Hisense U8G, which are significantly harder acts to follow.

The V555-J is perfectly watchable with most material, and in everyday use you might not have any complaints. It also did quite well in most of the Spears & Munsil tests (aside from motion), and it didn’t have a lot of issues with my standard test videos. However, it did have some.

That said, it did suffer—in varying degrees (very mild to mild)—from just about every deficiency the better TVs have moved on from, or have at least significantly ameliorated in the last few years: Judder, moiré, inaccurate color, and more. The most annoying problems of all were an extremely narrow optimal viewing angle and poor screen uniformity.

The latter means that at times there was obvious cloudiness in various areas of the display when light backgrounds were in play. Perhaps there was something off on this particular TV, the production run, or Vizio switched to a cheaper anti-glare coating/coating process. Uniformity didn’t strike me as much of an issue with the V505-H19, although I no longer have that TV to compare with the V555-J.

At least there’s no old-school, cold color—the V555-J’s palette is quite warm. Perhaps too warm in some circumstances. (You can tweak some of it out with the TV’s granular color settings). There were times when I was looking at HDR10 material that over-saturated reds killed image detail.

The V555-J’s internal speakers produced plenty of volume, and I didn’t have any difficulty picking out dialogue. They’re livable, but lacking in both bottom and high end. I’d opt for outboard sound—or perhaps headphones for serious solo viewing.

If I were watching the V555-J at home, I wouldn’t be perturbed with the image as long as I was sitting dead center of the screen—or only slightly off-axis. But I would wonder from time to time if I shouldn’t have spent just a just a tad more to get a much better TV.

After seeing the relatively small gap in pricing between Vizio’s V-series and its M-series, I’d recommend spending the extra bucks for the quantum-dot color found in the latter. That’s a recommendation based on my 2019 review of the M-series Quantum, with the major caveat that I have not actually seen this year’s M-series TVs.

I also recommend you kick the tires on TCL’s 5-series TVs, which have better screen uniformity and more accurate color.

Denial of responsibility! TechNewsBoy.com is an automatic aggregator around the global media. All the content are available free on Internet. We have just arranged it in one platform for educational purpose only. In each content, the hyperlink to the primary source is specified. All trademarks belong to their rightful owners, all materials to their authors. If you are the owner of the content and do not want us to publish your materials on our website, please contact us by email – [email protected]. The content will be deleted within 24 hours.
Affordablegadget updatemiddlingperformanceReviewtech boytech newstech news boy
Share FacebookTwitterGoogle+ReddItWhatsAppPinterestEmail

The thickness of lead’s neutron ‘skin’ has been precisely measured

Microsoft: Why Call of Duty series’ success may heat up…