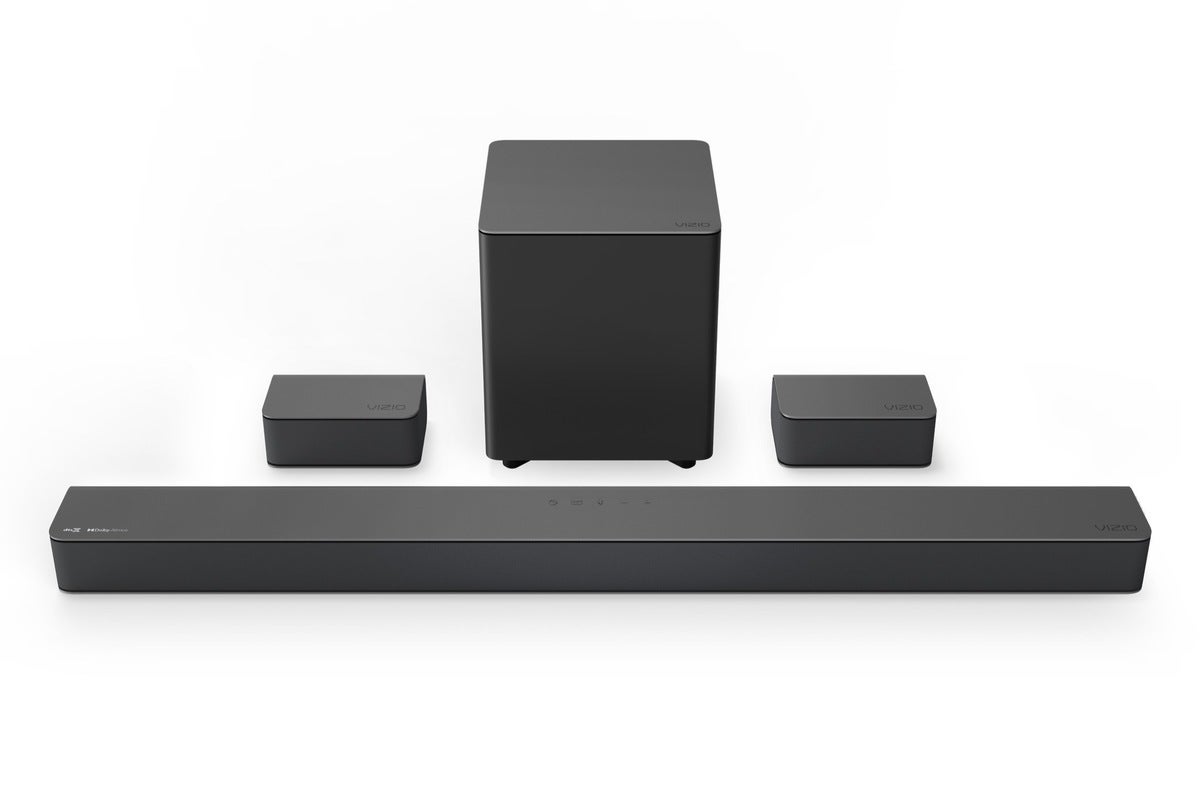 Barely a year ago, only a handful of high-end soundbars could handle eARC, an “enhanced” version of the ARC (or “audio return channel”) standard that allows for lossless audio. But this year, eARC support for soundbars is becoming decidedly mainstream, with Vizio announcing that more of its mid-range models will support the feature.

Vizio took the wraps off its 2022 line of soundbars on Wednesday, and no, you won’t have to wait a year before they appear in stores, with several of the new models going on sale today.

Included in the lineup is the M512a-H6, a 5.1.2-channel soundbar that we just reviewed. Slated to go on sale next month for $450, the M512a-H6 comes with surround speakers that connect to a wireless soundbar, while a pair of upfiring drivers deliver height cues for Dolby Atmos and DTS:X soundtracks.

The M512a-H6 also arrives with eARC support, which allows the soundbar to decode lossless Dolby TrueHD and DTS-HD Master Audio sound (generally on Blu-ray discs) when the soundbar is connected to an eARC-enabled TV via their respective HDMI-ARC ports. (Click here to learn more about HDMI-ARC and eARC.)

Until now, Vizio’s top-of-the-line Elevate, a $1,000 soundbar with swiveling height drivers, was the only soundbar in its lineup that supported eARC. (It’s worth noting that other manufacturers are adding more eARC-enabled soundbars as well, including LG and Samsung.)

The M512a-H6 won’t be the only mid-range Vizio soundbar to offer eARC support this year. Two other M-Series soundbars will also boast the feature, including the M51ax-J6, a 5.1-channel soundbar with Dolby Atmos, DTS:X, and DTS Virtual:X sound. The M51ax-J6 is on sale now for $330 (and I currently have one in my living room, so stay tuned for a full review).

Also riding the eARC train is the M215a, a 2.1-channel soundbar that (like Vizio’s other 2022 M-Series models) comes with Dolby Atmos and DTS:X audio. The $300 soundbar (which doesn’t have a shipping date yet) will mark one of the most affordable models we’ve seen to arrive with eARC support.

Vizio’s budget V-Series soundbars will only support the standard version of ARC. That means no lossless audio support via ARC, but that should suffice for those using streaming video players (such as Apple TV, Amazon Fire TV, and Roku devices) rather than Blu-ray players.

Vizio’s top-of-the-line Elevate (which we reviewed last winter) won’t be getting an update this year, but its swiveling “elevate” drivers “will also be made available” in future soundbars, Vizio promised, without offering any further details.

Vizio also touted a new remote with a backit one-line display that will ship with soundbars equipped with more than 4.1 channels. For details on that remote, check out my review of the M512a-H6.

Denial of responsibility! TechNewsBoy.com is an automatic aggregator around the global media. All the content are available free on Internet. We have just arranged it in one platform for educational purpose only. In each content, the hyperlink to the primary source is specified. All trademarks belong to their rightful owners, all materials to their authors. If you are the owner of the content and do not want us to publish your materials on our website, please contact us by email – [email protected]. The content will be deleted within 24 hours.
boasteARCgadget updatelineupmodelssoundbartech boytech news
Share FacebookTwitterGoogle+ReddItWhatsAppPinterestEmail

Realme sale: Discounts of up to ₹17,000 on smartphones, smartwatch, earphones