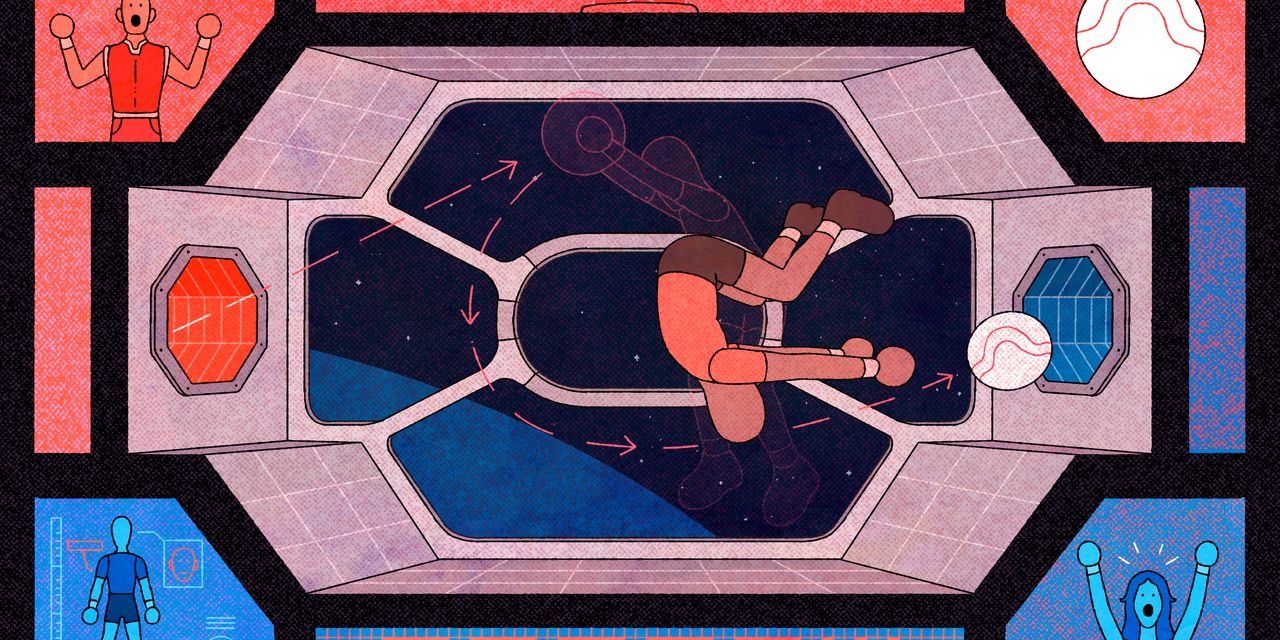 Why Sports in Space Could Be the Next Big Thing

Pursuits from space soccer to Martian mountaineering are already in early planning stages. “People going into space are competitive thrill-seekers,” says Allison Dollar, co-founder of the Space Tourism Conference, an annual event organized for the aerospace, design and entertainment industries by the nonprofit Space Tourism Society. “The novelty of pondering Earth from the stars will at some point wear off—it’s only natural that we evolve to have sports in space.”

The Future of Everything

A look at how innovation and technology are transforming the way we live, work and play.

The space travel and tourism market—including suborbital and orbital rides at six figures per seat, stratosphere balloon flights, simulated zero-gravity flights, and long-haul journeys—will be worth $23 billion by 2030, financial-services company

estimated in a 2019 report. John Spencer, founder of the Space Tourism Society, foresees outer-space yacht races with mini spaceships and lunar-buggy derbies in the decades to come. “The people investing in space right now are looking for the newest, coolest things to do,” he says. “Sports are going to be a big part of space evolution. When you look at the sponsorship money that goes into the NFL or NBA, this is a no-brainer.”

With space sports in development, real live-streamed games will follow, he predicts. Space stations could become larger and include stadiums. Or the venues may look completely different.

Ken Harvey, a former linebacker for the Washington Redskins (now Commanders) experienced weightlessness in 2008 aboard a flight with Zero Gravity Corporation, an Exploration Park, Fla.-based company that operates flights from airports in the U.S. He says his initial reaction was: “This is cool, but what do you do when you get bored?” This inspired him to devise a game that could be played in space. Called “Float Ball,” his vision combines elements of football, dodgeball and basketball and involves teams moving balls of various colors to a total of four goals at either end of the playing venue–be it a spaceship cabin or custom space arena. He’s working with Linda Rheinstein, founder of the privately funded Space Games Federation, to develop the game.

The idea of zero-gravity athletics has a long history. Astronauts strap themselves to treadmills for two-plus hours a day while in orbit to avoid bone loss due to the lack of gravity. Sports as recreation have also been attempted in less-than-serious forms. In 1971,

14 Commander Alan Shepard teed off on the surface of the Moon. In his pressurized space suit, he could only swing the golf club with one hand. Yet the slow half-swing sent the golf ball flying around 600 feet. In 2014 and 2018, astronauts and cosmonauts celebrated the FIFA World Cup by testing their soccer skills aboard the International Space Station.

Those early stunts made clear that some of the world’s most popular sports don’t translate when you remove or reduce gravity. Ms. Rheinstein. whose career in television sports graphics earned her a place in the Sports Broadcasting Hall of Fame, says she founded the Space Games Federation in 2014 with the aim of developing new competitive sports designed to be played in zero- or micro-gravity. “Right now, space is a billionaire boys club,” she says. “I hope one day sports can democratize space, providing access for both ‘astroletes’ and spectators.”

In 2019, the group launched a crowd-sourced competition to develop original games designed to be played in space. A global vote on the organization’s web site narrowed submissions, and the federation on Friday announced five winners, including “Inno”—a game that involves trampolines and Velcro-padded walls with the aim of bouncing balls through the opposing team’s goal—and “Space Ball,” a riff on basketball with the objective of getting a magnetic ball through a hoop of the same polarity.

The winners will split a $5,000 cash prize and have their ideas fine-tuned on gravity-free parabolic flights affiliated with the Space Games Federation in hopes of ultimately becoming the basis of space sports leagues, Ms. Rheinstein says. She is also working to develop Earth-based spatial-awareness training programs for what she calls astroletes. One of the first is a collaboration with Greg Roe, a Canadian expert in extreme trampoline, which involves seemingly gravity-defying jumps and maneuvers.

The Underwater Torpedo League, a group of clubs in the U.S. that play what is essentially underwater football, using a hydrodynamic ball resembling a mini torpedo with fins, have also been training aerospace professionals.

Do you think sports in space will take off in coming years? Join the conversation below.

Virtual reality has become an accessible way for Earthlings to test their space-athletics skills. MarsVR, a collaboration between the Mars Society, a Lakewood, Colo.-based non-profit dedicated to human exploration on Mars, and MXTreality, a Seattle-based technology company specializing in virtual and augmented reality experiences, simulates what it would be like to experience sports on the surface of the Red Planet.

Camilo Tobacia, an engineer at

Blue Origin space company and founder of Space United, a network of traditional soccer clubs for space engineers, worked with the MXTreality developers to design a feature in their soon-to-launch MarsVR experience that allows users to attempt to kick a soccer ball on Mars, as well as learn about how throwing and hitting sports in Martian gravity may have to be adjusted. Playing an actual soccer game in low gravity on Mars may not be far off, Mr. Tobacia says. “Maybe it won’t exactly be how we play on earth, but we’re talking to engineers about creating a dome where you could bounce a ball off walls and jump off walls,” he says. “It would be a superhuman indoor soccer game.”

Jeff Raynor, founder of MXTreality, says he is working to develop climbing experiences based on features of different planets—for instance a 70,000-foot-high peak on Mars. “We’re using NASA data to rebuild the terrain and explore what climbing could look like,” he says. “You won’t be able to use your bare fingers to grip a rock since you’re in an awkward suit wearing gloves, but you can jump three times higher.” Mr. Raynor, who has a degree in astrophysics, says he wants to leverage the superpowers we appear to have on other planets and explore creating the next evolutionary sports for space, like basketball-quidditch, high-jump hurdles, and sideways gymnastics.

Write to The Future of Everything at [email protected]

Denial of responsibility! TechNewsBoy.com is an automatic aggregator around the global media. All the content are available free on Internet. We have just arranged it in one platform for educational purpose only. In each content, the hyperlink to the primary source is specified. All trademarks belong to their rightful owners, all materials to their authors. If you are the owner of the content and do not want us to publish your materials on our website, please contact us by email – [email protected]. The content will be deleted within 24 hours.
astronomyBigC&E Exclusion FilterclimbingContent TypesFactiva Filtersgadget updategeneral news
Share FacebookTwitterGoogle+ReddItWhatsAppPinterestEmail

Aadhaar to Be Collected for Electoral Registration in Chandigarh: Details