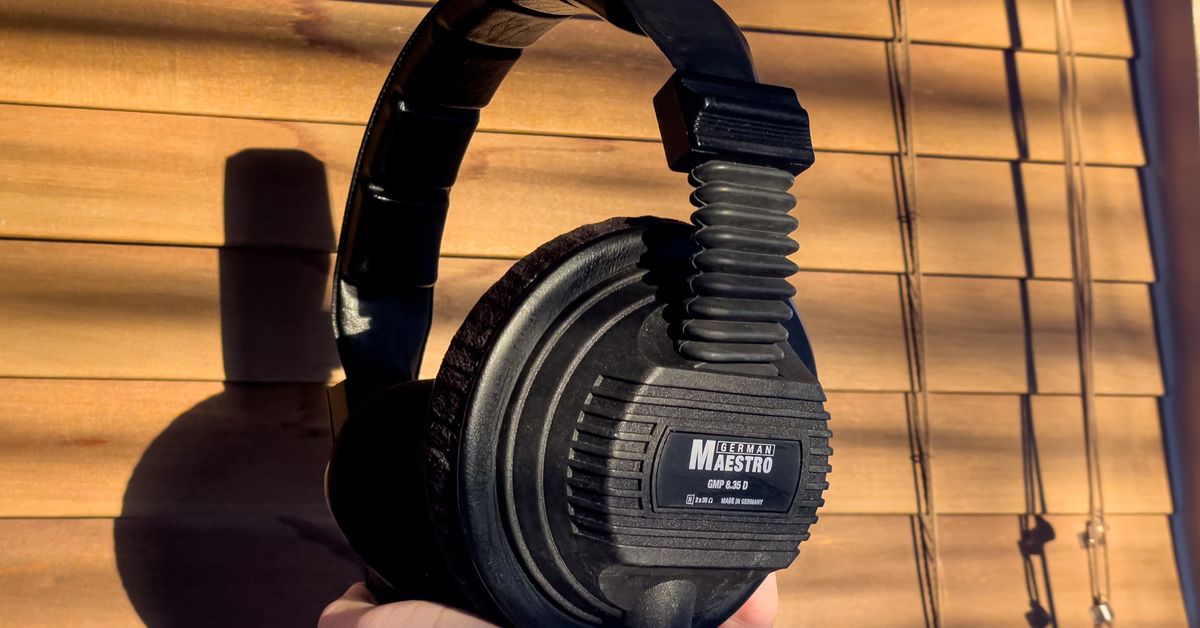 You cannot destroy these headphones

I hate buying something cheap. There is nothing worse than that sinking sensation when you open something up and know it’s not long for this world. I am also hard on my gear, which led me to buy these bulletproof headphones from an obscure company called German Maestro.

I edit a lot of videos and do voiceover work. And if you have done any video work, you have almost certainly used a pair of Sony MDRs. They are iconic. You can spot the blue or red stripe and coiled cable from across a set. When you go to film school, you are basically issued a pair of MDRs like a service rifle, and not without good reason.

First and foremost, they’re cheap. They usually go for about 80 bucks if you look out for sales. Their near ubiquity on film sets means that you can snag these phones at a massive discount, making them one of the better deals for people that need a headphone to do work on. Next, they are closed-back headphones, perfectly isolated, which allow you to pick out imperfections in the mix. There is a reason you see guys monitoring audio on film sets and video shoots wearing these. Third, they are fairly “flat,” and without getting too technical and pedantic, they don’t try to dress up what you’re hearing to sound pleasing. They’re not bass-heavy Beats. These are for getting work done. Lastly, they are pretty well built for the cost. They fold up and are durable, which is why you can throw them in a Porta Brace bag without worrying about them getting messed up.

For what they do, the MDRs are okay. But they are not perfect.

For one thing, they have a way too long, non-removable telephone cable that can be good in a studio setting but is comical if you are trying to listen to music on your phone. I hate this cable with every fiber of my being. In principle, I strongly feel that all headphone cables should be removable, as cables can suffer tons of abuse. But what really drives me up the wall is I hate the coiled style of cable. I find that it snags on too many things too easily, and every time it got a kink in it, it drove me up the wall.

The second thing is that the foam pads on the MDRs just straight up suck. It’s not simply a question of comfort; they are just really bad pads. I almost always upgrade the pads on my headphones to either Dekoni or Brainwavz pads, but you will almost certainly have to replace these pads sooner than you think, particularly if you are using them in an unforgiving production context.

Lastly, I just don’t love the way they sound. How headphones sound gets into very subjective territory, but the MDRs are, at best, fine and, at worst, too harsh for me. These were work headphones, but there was something about the treble that made my skin crawl while I was listening to people talk. It’s unfair to ask more of the MDRs for the price, but at the end of the day, I just wanted something slightly nicer: a pro version of the MDRs with nicer foam, better and removable cording options, and a less fatiguing sound. At the time (November 2020), this was not offered in America.

This led me down a long and winding path, trying to find a pair of headphones that ticked off all the same markers: flat, indestructible, closed-back, better cable. When you get into the higher echelons of audiophile perversion, most of your headphone options outside of IEMs are open or semi-open. I researched some of the most respected studio headphones. Many people I know swear by the Beyerdynamic DT 770 Pros, and while they are indeed a studio staple, durable, and have some of the most comfortable stock pads of any headphone in its range, they are not what I would call flat, and I could not get used to how they sounded. The Audio-Technica ATH-M50x also checked off many of my needs, but I did not like the sound, and they did not feel special or particularly durable. A friend of mine swears by the Sennheiser HD 300 Pros, and I would believe him, but unfortunately, I never got to test them. Sony also has another obscure but well-respected non-folding big brother to the MDR-7506s called the MDR-CD900ST that has a flat cable, as well as an even higher-end model called the Sony MDR-M1ST that has a detachable cable, but the former was not available outside of Japan until fairly recently and the latter you still have to import.

Eventually, my answer came in the form of a 76-page thread on the Head-fi forums from 2009 to 2019 by a user named Acix titled “The German Maestro GMP 8.35 D Monitor in the studio… serious about audio, INDEED!!” I had never heard of the German Maestro (formerly MB Quart), but from the jump, I was intrigued. The headphones looked industrial. Solid. Efficient. In a word, they looked German. “Man, I’m all about funtion (sic) over form, but those have to be the ugliest phones I’ve seen,” said user Bones2010. To me, they looked beautiful.

Many of the reviews were glowing, with the words “indestructible” frequently being mentioned. Someone dropped the image of a pair of black leather boots stepping on them. Another thread mentioned that they were frequently used in listening stations at music shops. People seemed to love their balanced, detailed sound and the fact that they were very sensitive and thus did not need a powerful headphone amp to listen to them. In threads and elsewhere, reviews compared them favorably to the Sennheiser HD25-1s, but better and with a slightly darker tone. Tight. Controlled. One user mentioned they were better in every respect to their MDRs, which is exactly what I wanted at the price point.

As the thread progressed over several years, people started getting creative. Some did not like the stock pads and replaced them with lush ones from the aforementioned DT770s as well as Brainwavez HM5s. Others drilled holes in them and did modifications to the stock cable. Eventually, German Maestro released a version with a removable cable and an additional stock pair of pads called The GMP 8.35 Mobile specifically because of requests from customers with autism. It’s refreshing to hear a company take feedback like that.

The phones seemed to tick off every single checkmark, but buying them turned out to be slightly tricky. Aside from a drop.com release, nobody in the States stocked them, so I had to order them directly from the manufacturer and pay in euros. I patiently waited, and when they arrived, they were exactly what I needed them to be.

I was immediately struck at how sturdy they were. The plastic was thick, but it did not weigh the phones down. Everything made today feels cheap and flimsy. They felt like they were from a different era, unstuck in time when products were measured in decades, not years. These were the headphone equivalents of English-made Doc Martens. I could throw these things against a brick wall, run a bike over them, yank them from the teeth of a dog, and they would probably be fine.

They sounded the way they looked: “controlled,” as one forum user put it. I don’t want to get too deep in the weeds of audiophile testing because that really isn’t the point of this blog (although I would gladly loan my pair to crinacle or the folks at Audio Science Review for more extensive testing). They were clear and flat, with tons of detail but not terribly showy. The bass was there, but not overbearing like I had found Beyerdynamics to be. If something was wrong with my mix, I could hear it immediately, like listening to a pair of Yamaha NS10s. I ended up preferring the velour pads, which changed the sound just slightly, but recently I have wanted to try other options out. They are not the best headphones I have ever heard, but within the parameters of what I need them to do, they are peerless.

Of course, they were not everyone’s cup of tea. Some people I have shown them to have found them a little uncomfortable. Others did not like the sound. When I showed them to Alex Parkin over on the video team (a certified MDR user with a well-worn pair who also despises the coiled cable), I could sense his apprehension. “I would definitely need to get used to these,” he said.

But even people who could not get down with the sound agreed that they were sturdy, efficient, and had fantastic isolation. The Maestros are ideal studio headphones made by a small and obscure company that seems to truly care about the product they produce. Are they worth the trouble to import? I personally have no regrets.

At the corner of my desk, I have two headphones hanging from a hook: a pair of Hifimans and my Maestros.

The Hifimans are big and airy, with comfy Dekoni pads I substituted out. Those are my easy-listening headphones. They are big and fragile, they have never left my desk, and I have still had to order a replacement headband from the manufacturer.

My Maestros sit next to them. They are my “work headphones,” sensible and sturdy, meant for durability and concentration like a Herman Miller chair. Every time I pick them up, I feel a sense of joy. I think about that thread forum that went on for a decade, with new people rotating in, discovering, loving, and sometimes really hating these cans. I hold them and know that there is a very good chance that they will still work for decades, possibly even after I am dead and buried, and how truly rare it is to buy a piece of gear made to outlive you.

Denial of responsibility! TechNewsBoy.com is an automatic aggregator around the global media. All the content are available free on Internet. We have just arranged it in one platform for educational purpose only. In each content, the hyperlink to the primary source is specified. All trademarks belong to their rightful owners, all materials to their authors. If you are the owner of the content and do not want us to publish your materials on our website, please contact us by email – [email protected]. The content will be deleted within 24 hours.
destroygadget updateheadphonestech boytech newstech news boytech updatetechnewsboy
Share FacebookTwitterGoogle+ReddItWhatsAppPinterestEmail

New boundaries and thresholds: The current state of edge computing

Cheaper iPhones on the way? Apple is actively looking to increase production in India | Digit