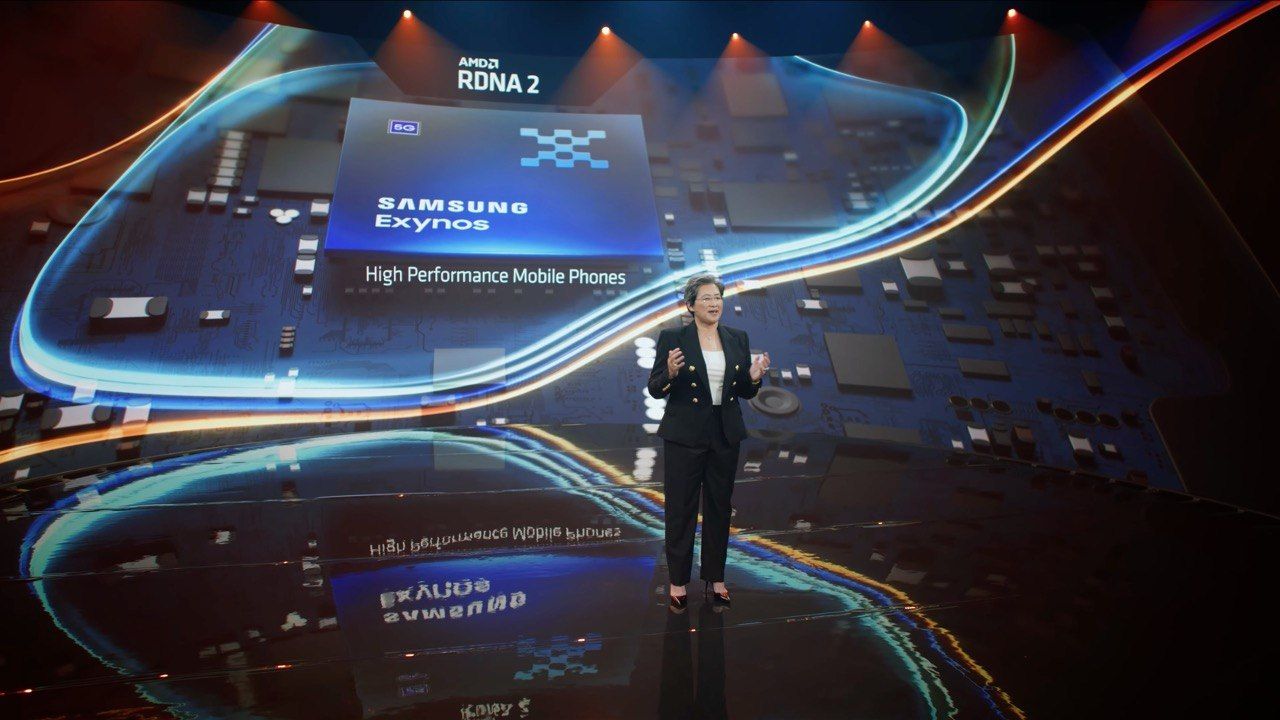 AMD has partnered with Samsung to bring the RDNA 2 graphics architecture to boost mobile gaming. During the Computex 2021 keynote session, AMD announced that it has inked partnerships with Samsung and Tesla to bring new gaming experiences to mobile and automotive products. With Samsung, AMD is working on the next-generation flagship Exynos SoC that aims to bring raytracing and variable rate shading to smartphones. It should be noted that AMD’s RDNA 2 architecture is also featured on the latest consoles, namely the Playstation 5 and Xbox Series X/S.

“AMD has partnered with industry leader Samsung for several years to accelerate graphics innovation in the mobile market and we’re happy to announce that we will bring custom graphics IP to Samsung’s next flagship SoC with raytracing and variable rate shading capabilities,” said AMD CEO Dr. Lisa Su during the keynote address.

AMD did not delve too deep into its partnership with Samsung and we know that the upcoming Exynos SoC will feature AMD RDNA 2 architecture-based IP that will enhance the overall mobile gaming experience. Samsung and AMD first announced their multi-year deal back in June 2019, noting that AMD GPU-based smartphones were still two years away. This year, it seems Samsung will get the ball rolling and we may finally get to see the first phone getting AMD’s RDNA 2-based GPU either by the end of the year or early 2022.

As per the latest reports, Samsung could be working on launching three new chipsets in 2021. These could include a mid-range 800 series SoC, a 1200 series SoC and a flagship 2200 series chip. The Exynos 2200 is said to be the follow-up to the Exynos 2100 SoC that powers the Galaxy S21 flagship. The Exynos 2200 is rumoured to outperform the Apple A14 Bionic chipset by a huge margin and said to deliver over 25% better CPU performance over the last generation.

With its partnership with AMD, Samsung is looking to boost the GPU performance on its smartphones and tip the scales in its favour. We are also seeing a shift in how game developers are approaching mobile gaming and many AAA titles are slated to launch for Android and iOS smartphones in 2021. Samsung will reveal more details about its upcoming flagship Exynos chip later this year.

Apart from Samsung, AMD has also partnered with Tesla for the Tesla Model S and Model X refresh. The new infotainment systems in these cars are powered by the AMD Ryzen APU and RDNA 2 architecture-based GPU that brings in AAA gaming.

Denial of responsibility! TechNewsBoy.com is an automatic aggregator around the global media. All the content are available free on Internet. We have just arranged it in one platform for educational purpose only. In each content, the hyperlink to the primary source is specified. All trademarks belong to their rightful owners, all materials to their authors. If you are the owner of the content and do not want us to publish your materials on our website, please contact us by email – [email protected]. The content will be deleted within 24 hours.
AMDchipComputex 2021DigitExynosExynos with RDNA 2featureflagship
Share FacebookTwitterGoogle+ReddItWhatsAppPinterestEmail

God of War: Ragnarök Delayed, but Coming to PS4 Too

Amazon latest to layoff 20,000 employees: Why is big tech…