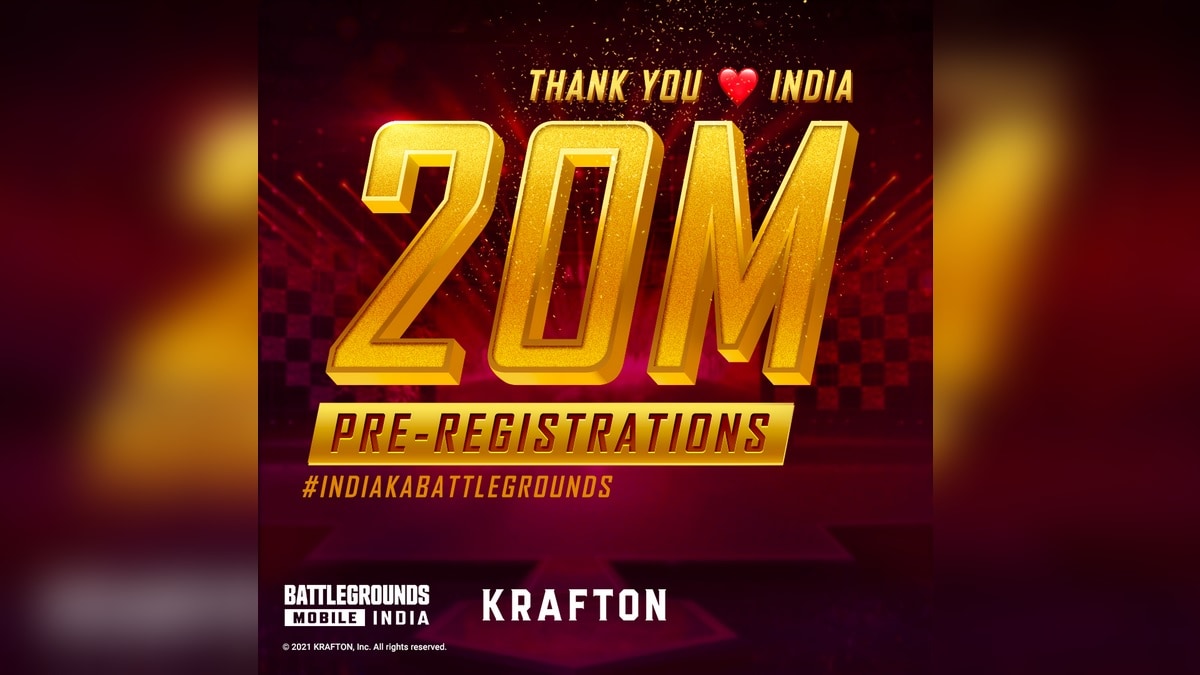 Battlegrounds Mobile India, the Indian version of PUBG Mobile, has crossed 20 million pre-registrations in the country in just over two weeks. The game went up for pre-registrations for Android users on May 18 after being announced early last month. Battlegrounds Mobile India is the Indian avatar of PUBG Mobile that was banned in the country back in September last year along with 117 other apps. The game is essentially the same as PUBG Mobile but with some tweaks made for the Indian audience.

Pre-registrations bring India-specific rewards that can be claimed when the game officially launches. These include a Recon Outfit, Recon Mask, in-game currency, and more. Those who have pre-registered for Battlegrounds Mobile India will have the game downloaded automatically when it launches, if they have the feature turned on in Google Play.

“We would like to express our sincere gratitude to our Indian fans for their overwhelming response to the Battlegrounds IP first developed by me and my team in 2017. The Battlegrounds IP received love and acclaim from players worldwide, and Krafton will continue to build on the IP. That effort includes bringing amazing content to Battlegrounds Mobile India and providing an incomparable battle royale experience to our players,” said CH Kim, CEO, Krafton.

Fans who have been waiting for a release date will have to keep waiting as the developer is yet to share one. The press release also states Battlegrounds Mobile India release date will be shared at a later date. Speculations suggest that the game will be playable on June 18 in the country.

PUBG Mobile was banned in India in September 2020 due to its connection with Chinese company Tencent. After the ban, the ownership of the game switched to Krafton who has been trying to re-launch the game in the country. After several months, it was able to do so in the form of Battlegrounds Mobile India.

Denial of responsibility! TechNewsBoy.com is an automatic aggregator around the global media. All the content are available free on Internet. We have just arranged it in one platform for educational purpose only. In each content, the hyperlink to the primary source is specified. All trademarks belong to their rightful owners, all materials to their authors. If you are the owner of the content and do not want us to publish your materials on our website, please contact us by email – [email protected]. The content will be deleted within 24 hours.
20MillionBattlegroundsbattlegrounds mobile indiaCrossgadget updateIndiaKraftonMark
Share FacebookTwitterGoogle+ReddItWhatsAppPinterestEmail

Amazon Fresh is more than quadrupling how much you’ll need…